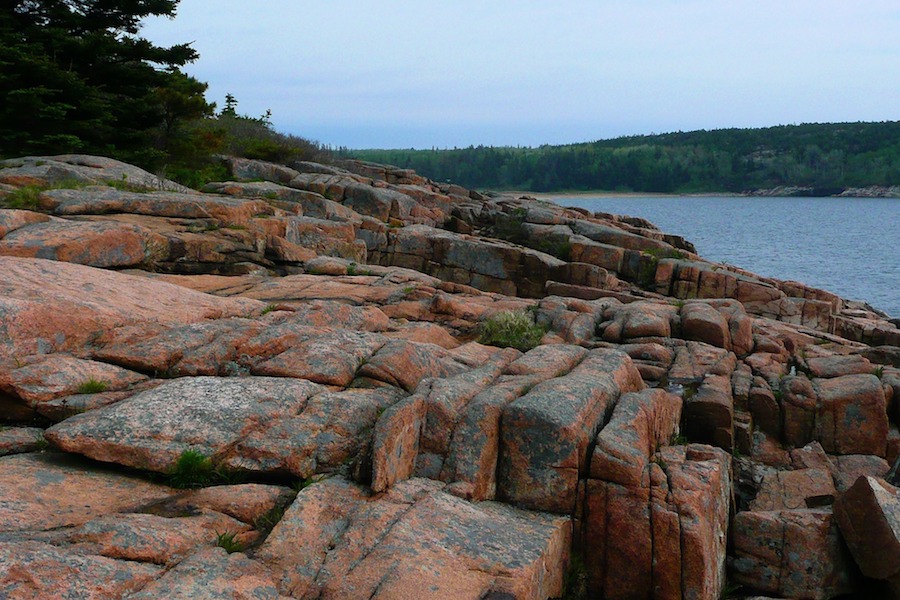 The resilient land of Acadia National Park continued to rise relative to the sea until about 10,000 years ago, when it finally stabilized. Since that time, the level of the sea worldwide has risen to its present height, and continues to rise at a rate of about two inches per century. The rising sea and depressed land mass created a "drowned coast." This means that what appears today as arms and fingers of the sea were once river valleys; islands were the tops of mountains; headlands and peninsulas were rocky ridges. The bedrock gave substance and the glaciers gave character, but without the sea, Acadia would be like a gem without a setting. Each headland, bay, and inlet reveals the majestic interface between sea and land. Acadia's rocky headlands bear the brunt of enormous energies unleashed in waves that batter cliffs and erupt in lofty spray.

The sea constantly reinvents the coastline of Acadia National Park. Waves and currents take material from one point on the coast, only to deposit it somewhere else. Cobble beaches are created in this manner, as rocks are dislodged and smoothed by the force of the ocean then placed on another section of shoreline. Because Acadia's coast is young, sandy shores are rare. However at Sand Beach, the park's largest feature of this type, shore currents have shifted the tons of sand that the sea eroded from the rocks. Mixed into the sand are broken bits of shells and the skeletons of crabs, mussels, sea urchins, and other marine life.

The liveliest regions of the oceans are waters over continental shelves. Whether referred to as coastal margins, coastal zones, or continental shelves, these waters are the most nutrient-rich and biologically productive marine waters on Earth. Here, too, are found vast underwater deposits of oil and natural gas, the remains of ancient life forms now valued by people as energy sources for fueling onshore economies. Being rich in marine and fossil life, continental shelves are marked by sometimes conflicting uses as living marine habitats and sources of undersea fuels.

The continental slope is a continuation of the coastal plain and slopes gently downward (0.1 degree) away from the coast. At its outer edge, the continental slope dips more steeply (4 to 6 degrees) to the deep ocean floor beyond. Where deep ocean currents head onshore, they bring nutrient-rich water upward along the outer slope, allowing life to bloom in the sunlit waters near the surface.

In more temperate regions, marginal waters are less stratified and more thoroughly mixed. Minerals and nutrients from deeper waters are apt to be stirred upward by currents driven by wind, storms, and tides, supporting growth of marine plants (phytoplankton) at the base of the marine food pyramid.

Nutrients and minerals flow into marine waters from streams and rivers, providing food for phytoplankton in estuaries and marginal shallows all along the coast. If these nutrients are excessive, as they currently are at the mouth of the Mississippi River where fertilizer-rich runoff from Midwestern farms drains into the Gulf of Mexico, phytoplankton quickly bloom, then die off, depleting dissolved oxygen, leaving a dead zone devoid of life. Phytoplankton thrive on moderate amounts of nutrients, but can be overwhelmed by an unintended overdose resulting from human activities in a watershed far, far away.

Phytoplankton are eaten by zooplankton, minute marine animals, which are eaten by shrimp and copepods, and in turn, say, by herring or cuttlefish, which are eaten by ever larger cod, tuna or sharks. Humans are at the top of the marine food web, hauling up vast amounts of protein from Earth's coastal zones.

Many of the world's fisheries concentrate on species that thrive in waters over continental shelves. The migration of whales, too, often takes place over continental shelves where marine life is plentiful. Here are the offshore oil rigs and coastal shipping lanes of the world. The relatively shallow bottoms are dragged and trawled for bottom-dwelling species. Roughly half of the continental shelves of the world are gone over by weighted fishing gear every year. Over muddy bottoms, the gear sends up plumes of mud which settle, effectively burying bottom tube dwellers in their burrows. Over sandy and rocky bottoms, corals and sponges are ripped away, greatly depleting the diversity of life that lives on the shelves at the margin of every continent.