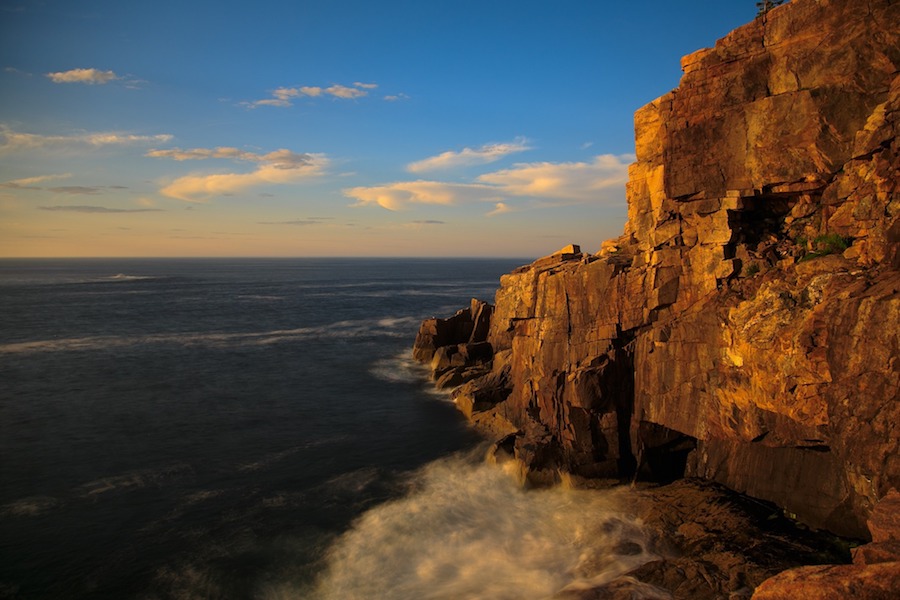 People inhabited this area at least 5,000 years ago. They were hunter-gatherers who shaped stone tools and used them to gouge out the trunks of hemlock trees to make canoes. They made tools for cutting and chopping and pounding, and as weights for fishing lines in the deep sea. From their dugout canoes, they fished and pursued swordfish, and hunted sea mammals. The groups who lived here over the thousands of years, left behind evidence of their time here: the stone tools, and large piles of mussel and clam shells, called shell middens, which provide clues to their daily lives. In more recent times, the Wabanaki, People of the Dawn, carried on hunter-gatherer activities as well. They built wigwams and canoes of birch bark.

They traded up and down the coast with other American Indians, and European explorers and fishermen. In the 1800s, they taught tourists and summer residents how to canoe on Frenchman Bay and crafted baskets for sale to the burgeoning tourist trade. The French navigator-explorer, Samuel Champlain, made the first reliable European record of the area in 1604, though because of the turbulance that followed between the French and British, it was not until 1762 that a permanent European settlement was established. These hardy folk subsisted here, farming and fishing, and eventually opening their homes to paying tourists, called "rusticators", who enjoyed the rustic lodgings and the primitive and wild state of the island.

Tourism flourished beginning in the mid-1800s, and the island supported a population of wealthy summer residents who came here to escape the pressures of city life. Acadia National Park was founded by those who wished to see their favorite views and special places preserved for the future, rather than developed and harvested. Thanks to their stewardship and foresight, the island retains a little of its wild nature, which first attracted visitors in the 1800s. Today, three million visitors a year enjoy what the park founders fought to preserve.

The Mission of the Curatorial Program at Acadia National Park (ACAD) is to preserve the natural and cultural history of ACAD and Saint Croix Island International Historic Site (SACR) and to preserve the history of the administration of the park. Towards this purpose historical artifacts, archival documents, and natural history specimens will be acquired, preserved both physically and intellectually, and interpreted through educational programs and research.

The Acadia National Park Museum Collection can be viewed at:

William Otis Sawtelle Collections and Research Center: Located in Bar Harbor at park headquarters, the Center is dedicated to William Otis Sawtelle, founder of the Islesford Historical Museum on Little Cranberry Island. The Center houses historic artifacts, archival documents, and natural history specimens currently not on exhibit at the Islesford Historical Museum or the Sieur de Monts Spring Nature Center. The museum items represent the natural and cultural history of Acadia National Park and Saint Croix Island International Historic Site; the Carroll Homestead of Southwest Harbor; George B. Dorr, one of the founding fathers of Acadia National Park; The Town of Cranberry Isles; New France; and the administrative history of Acadia and Saint Croix.

The Center is open Tuesday through Friday from 9:00 to 4:00, by appointment, year round . Access to the collection for scientific research, genealogical study, or development of a publication is permitted. Prospective researchers need to contact the park's Museum Curator for an appointment.

Archival documents in good condition (determined by the Museum Curator) may be photocopied for a small fee. Photographs (in good condition) may be reproduced for a fee (contact the curator for current prices). Artifacts may be loaned to other historic institutions for exhibitions.

Islesford Historical Museum: Founded by William Otis Sawtelle in 1919 and located on Little Cranberry Island. The permanent museum exhibits explore life in the Town of Cranberry Isles (a set of five islands located in the Gulf of Maine) during the 19th century, when schooners were the mode of transportation and oceans were the highways.

The Museum is open mid-June to late September and admission is free.

The Center is open mid-May to late September. Admission is free, and Interpretive programs are offered.