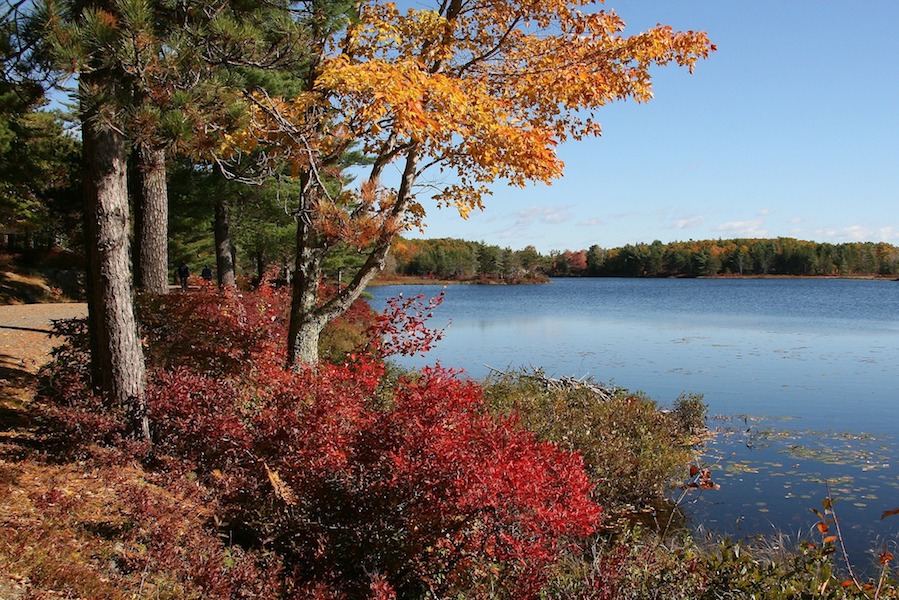 There has been a long history of botanical exploration in and around Acadia National Park. In the late 1880's, students from Harvard University made their way to Acadia from Boston via train and steamship each summer in search of the unique plants found in bogs, on mountain summits and the many habitats in between. The Champlain Society, as they called themselves, published "Flora of Mount Desert Island, Maine", authored by Rand and Redfield, in 1894. This benchmark publication cataloged vascular plants, mosses, algae and lichens. Acadia has over 1100 vascular plant species that represent a wide diversity of plant life adapted to thrive in acidic, low nutrient bogs and rocky, treeless mountain summits. Grasses and wildFlowers abound in park meadows, and lakes and ponds are home to emergent and floating aquatic vegetation. Almost one quarter of Acadia's flora is non-native, and about 25 species are state-listed rare plants. It is evident that 300 years of human settlement and land use have changed the composition of plant communities throughout Acadia National Park.

If you are in a wooded area of Acadia National Park, you are likely to find common, native woodland Flowers, such as wild lily-of-the-valley (Maianthemum canadense), bunchberry (Cornus canadensis), goldthread (Coptis trifolia formerly C. groenlandica), bluebead lily (Clintonia borealis), and starFlower (Trientalis borealis). Bunchberry is a member of the dogwood family and has dogwood-like white Flowers in spring and red bunchberries later in the season. Notice the arcuate venation (arching veins) on its leaves, a hallmark of the dogwood family (Cornaceae).

Bluebead lily has a pale yellow Flower in spring and later a striking blue, bead-like fruit that is poisonous. Goldthread gets its common name from its golden thread-like roots. You can take a peak at the gold threads without harm to the plant by carefully pulling the soil or moss away from the roots and then pushing it back. In August and September Acadia's native wildFlowers, the asters and goldenrods, both in the aster family (Asteraceae formerly named Compositae), are in full bloom. Their European relatives, daisies and black-eyed susans, are also in this family. Each Flower is a composite made up of many disk and ray Flowers.

Disk Flowers are in the middle surrounded by ray Flowers. Each she loves me, she loves me not petal is actually a complete Flower (take a look with a hand lens). So what appears to be one aster or daisy Flower is made up of many disk and ray Flowers densely packed together. If you look very carefully at goldenrods you will see that they too are made up of tiny daisy-like Flowers.

If you find a bog in Acadia National Park you are sure to see Sphagnum (pronounced "sfagnum") moss. Mosses, like ferns, reproduce by spores. However, mosses don't have well-developed conductive tissue and therefore cannot move water and nutrients throughout their systems as effectively as ferns and other vascular plants. Because of this, mosses by necessity always grow in low mats in wet areas close to their nutrient source. Sphagnum species are common and come in shades of green, red and brown. Bog hummocks, which are small mounds of Sphagnum, often form to create an undulating bog surface. Each species of Sphagnum finds its own niche based on levels of soil moisture. Therefore, the species of Sphagnum growing on the top of the hummocks are usually different from the ones growing between the hummocks!

A silver morning mist rises from Jordan Pond. A canoe slips silently by. A loon cries out, and farther down the lake, hidden in the mist, its mate replies. Acadia National Park bounds several lakes and ponds. Most lakes located within Acadia's boundaries serve as public water supplies for surrounding communities and permit no swimming. In the shadow of Beech Mountain, however, lies Echo Lake, with a sandy swimming beach which is life guarded in the summer.

When the mists lift, the colors of autumn reflect in Jordan Pond -- splashes of yellow, orange, and red. When the bright leaves of birch, maple, and oak fade and fall, the evergreen of spruce, pine, and fir remain. The dark boughs of hemlock hang over streams fed by the ponds, while the finger-like roots of cedar run along the banks and twine around rocks. In this forest, the floor is thick with mosses and ferns and patches of bunchberry dogwood. Spruce-fir forests take on a different character.

Spruce are tall and pole-like, and grow needles only at the canopy. The spruce spares no energy for growing needles where the sun cannot reach, and because the sun barely reaches the forest floor, little undergrowth emerges from the bump and swale of acidic, rust-colored needles that carpet the ground, except for more, tiny shade-loving spruce, waiting for their chance to grow tall.

Over 20% of Acadia National Park is classified as wetland. All classes of wetlands (marine aquatic beds, intertidal shellfish flat, salt marshes, freshwater marshes, forested wetlands, and peatlands) are found within the park. They form the transition between terrestrial and aquatic environments, and contribute significantly to the health, productivity, and uniqueness of the region. Wetlands are especially important because they maintain biodiversity by providing a habitat for a wide range of species. Native wildlife frequent wetlands alongside species that are nesting, overwintering or migrating, such as birds along the Atlantic flyway. More than half of Maine's state-listed rare plants are found in wetland habitats, and at least one rare plant is found in each Acadia wetland type.

About a quarter of the plants that one encounters at Acadia National Park appear "grass-like." The amateur would probably call all of these grasses, but in fact some are sedges and some are rushes. Here is a little rhyme to help tell the three apart: "sedges have edges, rushes are round, and grasses have joints." Sedges usually have a triangular stem, rushes have round stems, and grasses have a jointed stem. Sedges, grasses and rushes often inhabit wet areas. All of them have Flowers; they just aren't showy. Take a closer look and you will be amazed at the diversity of these wind-pollinated wildFlowers!

Visitors to Acadia National Park will undoubtedly find many ferns, an interesting group of spore-producing plants. They thrive in cool, moist, shaded areas, which are quite common on the coast of Maine! Some of the easier-to-recognize ferns are species of rock polypody ( Polypodium virginianum and P. appalachianum ) which appear almost identical, and are often found growing in leaf litter duff on top of large rocks. The fronds are singular and look like they are growing in a small colony or mat. If you turn one of the fronds over you may see the round sori, clusters of spore-producing structures, on the underside.

Another pair of related common ferns are cinnamon fern ( Osmunda cinnamomea ) and interrupted fern ( Osmunda claytoniana ). These two also look very much alike. Both are large ferns with non-fertile (vegetative) fronds arranged in whorls around the center. Cinnamon fern has separate, fertile, spore-producing fronds which sprout from the center of the plant in spring. These fronds are a cinnamon-like golden brown in color, which accounts for the plant's common name. Interrupted fern produces fertile leaflets in the upper third of the vegetative fronds, hence the frond is "interrupted" by the smaller fertile leaflets "within" the frond.

Acadia National Park is blanketed with forests and woodlands that are situated in the transition zone of two ecoregions: the northern boreal forest and the eastern deciduous forest. Much of the park is covered by spruce-fir forests, which is representative of the boreal influence, however, Acadia also contains stands of oak, maple, beech, and other hardwoods more typical of most of New England. There are also several unique, isolated forest communities, such as pitch pine and scrub oak woodlands, that are found in the park at their northeastern range limit. Similarly, jack pine reaches the southern limit of its range in Acadia.

A catastrophic fire in 1947 that burned a large portion of the eastern side of Mount Desert Island was the most recent major fire, but there is evidence of previous burns found in trees and soils in much of the park. The 1947 fire facilitated the replacement of conifers with deciduous species such as birch and poplar. Therefore, there are currently large areas of 50-year-old woodlands, as well as other areas that have had a longer time to develop since being disturbed.

Freshwater vegetation in Acadia National Park (NPS Photo) Freshwater (also referred to as "aquatic") plants are probably one of the most conspicuous features of the lakes, ponds, and streams of Acadia National Park. Approximately 80 species of freshwater plants can be found in the park, with an additional dozen species that are considered semi-aquatic shoreline species. Seven of these aquatic or semi-aquatic species are either currently listed or proposed for listing on Maine's Official List of Endangered and Threatened Plants, while about 30 others are considered "locally rare". Some freshwater plants grow completely submerged. Others are rooted in the bottom, but their leaves or Flowers may be on or above the water's surface. These are respectively known as "floating" and "emergent" vegetation. All freshwater plants are important members of the aquatic community, providing shelter and nesting sites to a variety of fishes and other animals, and serving as an important food source for mammals, waterfowl and turtles.

Once in the ocean, fresh water shares its burden of nutrients and salts picked up on its travels through the land with marine forms of life. First with estuarine life in sheltered inlets where it meets and mixes with salt water, creating habitats combining the best and worst of both worlds. "Best" in the sense of nutrient rich, with fresh water nutrients adding to those borne on the tide. "Worst" in the sense of becoming brackish, then salty, benefitting only plants and animals that can endure in an environment that is 3.5% salt. Which salt-marsh grass can, and eelgrass, along with numerous forms of plankton and algae. Plus clams, mussels, scallops, oysters, whelks, crabs, lobsters, and much of the other fare of restaurants alongshore.

Estuaries favor plants and animals that can tolerate fluctuating levels of salinity. Depending on the influx of fresh and salt water, and on the shape of the basin where they mix, estuarine life is immersed in water cycling between extremes of fresh and marine conditions. Salt-marsh grass, for example, has evolved several strategies for keeping and removing excess salt from its tissue, allowing it to thrive in settings that are toxic to most other species. Bacteria thrive on decaying marsh grass, and a host of estuarine creatures--including filter-feeding mollusks--feed on those bacteria, consuming a diet that can be almost 25% protein. Fish, eels, ducks, geese, gulls, herons, hawks, eagles, otters, minks, raccoons, and many other species occupy higher niches on the estuarine food pyramid, making a good living from conditions prevailing where fresh water mixes with salt. Estuaries serve as nursery grounds for a great many species that spend their mature years in the Gulf of Maine and North Atlantic.

Besides having enriched nutrient supplies and varying salinity, estuarine waters are generally shallow, sheltered from crashing waves, sunny, and superheated. As a result they are bountiful habitats in the transition zone between Earth's continents and its predominating oceans. Phytoplankton, buoyant algae too small to see with the naked eye, thrive in such places. Zooplankton, minute animals in the same zone, browse on the abundant phytoplankton near the surface where nutrients, sunlight, and warmer temperatures come together, laying the foundation of the marine food pyramid on which life in the ocean depends.