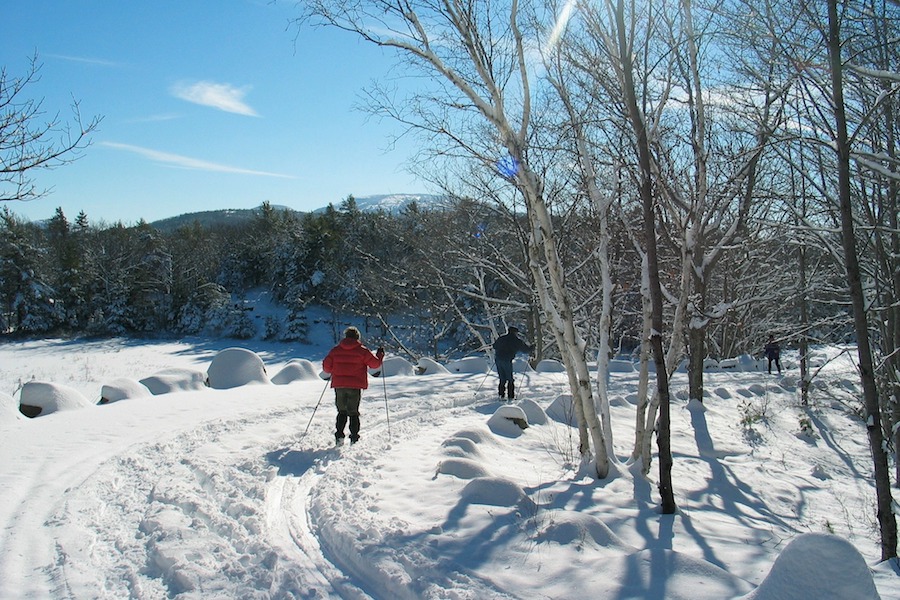 Forty-five miles of rustic carriage roads, the gift of philanthropist John D. Rockefeller Jr. and family, weave around the mountains and valleys of Acadia National Park. Rockefeller, a skilled horseman, wanted to travel on motor-free byways via horse and carriage into the heart of Mount Desert Island. His construction efforts from 1913 to 1940 resulted in roads with sweeping vistas and close-up views of the landscape. His love of road building ensured a state-of-the-art system.

Acadia's carriage roads are the best example of broken-stone roads - a type of road commonly used at the turn of the 20th century - in America today. They are true roads, approximately 16 feet wide, constructed with methods that required much hand labor.

Rather than flattening hillsides to accommodate the roads, breast walls and retaining walls were built to preserve the line of hillsides and save trees. Rockefeller, naturally gifted with the eye of a landscape architect, aligned the roads to follow the contours of the land and to take advantage of scenic views. He graded the roads so they were not too steep or too sharply curved for horse-drawn carriages.

Road crews quarried island granite for road material and bridge facing. Roadsides were landscaped with native vegetation such as blueberries and sweet fern. The use of native materials helped blend the roads into the natural landscape.

Rockefeller participated in the construction process. He walked areas staked out for road alignment and observed work in progress. He knew the laborers by name and used experts to design the bridges and engineer the roads. Throughout it all, he paid rapt attention to the most minute details, from the placement of coping stones to the cost of a running foot of road.

Following are some elements that unify the carriage road system:

Cedar signposts were installed at intersections to direct carriage drivers. The posts were stained with Cabots shingle stain #248. The lettering was painted first with one coat of flat yellow paint, then with another coat of enamel yellow. Today, numbers that match maps and guidebooks are attached to the signposts and help carriage road users find their way.

Rockefeller employed a crew of foresters to remove debris from the roads and roadsides. Nationally known landscape architect Beatrix Farrand consulted on planting designs to frame vistas and bridges and to heal scars left behind by carriage road construction. The Fire of 1947 destroyed much of her work.

Two gate lodges, one at Jordan Pond and the other near Northeast Harbor, ornament the roads and serve as impressive welcomes to the system. A third gate lodge was planned at Eagle Lake, but was never built. During carriage road construction, engineer Paul Simpson and his family lived at the Jordan Pond Gate Lodge.

Rockefeller financed 16 of 17 stone-faced bridges, each unique in design, to span streams, waterfalls, roads, and cliffsides. The bridges are steel-reinforced concrete, but the use of native stone for the facing gives them a natural appearance. Over time, the stone cutters grew very skilled and Rockefeller often requested them not to cut the facing too well lest the rustic look be lost.

The result of Rockefeller's vision and attention to detail is an integrated system of carriage roads that blends harmoniously with the landscape.

Maintaining the extensive carriage road system is no easy task, and the National Park Service could not do it alone. Between 1992 and 1995, an extensive rehabilitation of the carriage roads was financed by federal construction funds along with matching private funds from Friends of Acadia, a nonprofit organization dedicated to protecting the outstanding natural beauty, ecological vitality, and cultural distinctiveness of Acadia National Park and surrounding communities. Woody vegetation was removed from roads, shoulders, and ditches, and drainage systems were reestablished to arrest erosion. The crown and subgrade layers were restored, and new surface materials were applied to replace thousands of cubic yards washed away over the years. Coping stones were reset or replaced, and some of the historic vistas that once greeted horseback riders, carriage drivers, and walkers were reopened.

A portion of park user fees, authorized by the Recreational Fee Demonstration Program, also helps fund carriage road maintenance. Between 2001 and 2004, federal funds and park user fees paid for a major re-pointing, cleaning, and water-proofing of all carriage road bridges within the park. User fees have also funded annual projects, including repairing stone walls and opening overgrown vistas. More than one hundred vistas have been cleared in the past ten years.

A Spirit of Philanthropy

Park volunteers, visitors, and groups like Friends of Acadia are continuing a tradition of philanthropy begun by John D. Rockefeller Jr. and other early conservationists. Their valuable contributions of time, effort, and funds help protect the park and improve the quality of your experience. For more information about joining in these efforts, stop at Hulls Cove Visitor Center or visit the Friends of Acadia website at www.friendsofacadia.org. Such generous spirit allows the park to better meet its mission of protecting and preserving its cultural and natural resources for present and future generations.