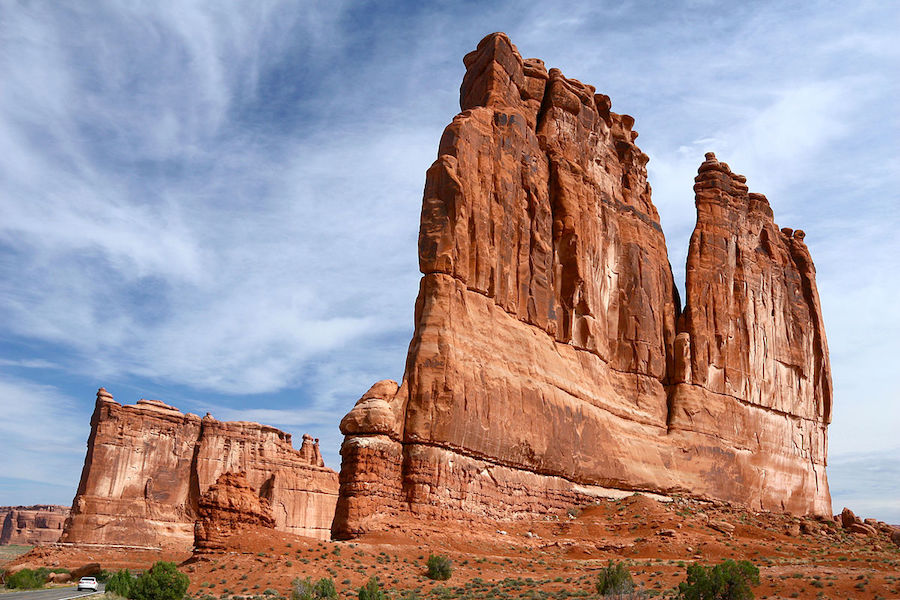 To many, the most outstanding natural features of Arches are the park's geologic formations. Over 2,000 catalogued arches range in size from a three-foot opening (the minimum considered to be an arch), to Landscape Arch which measures 306 feet from base to base. Towering spires, fins and balanced rocks complement the arches, creating a remarkable assortment of landforms in a relatively small area. Two unusual natural features common in Arches intrigue both scientists and visitors: cryptobiotic soil and potholes. Cryptobiotic soil is a living ground cover that forms the foundation of high desert plant life. Potholes are naturally occurring basins or pools in sandstone that collect rainwater and wind-blown sediment. These potholes harbor organisms that are able to survive long periods of dehydration, and also serve as a breeding ground for many desert amphibians and insects. Both of these communities are very vulnerable to human impacts

Seas covered this region 300 million years ago. When they dried up they left behind thousands of feet of salt. Later, layers of sand and other sediments covered the salt. When buried, the sediments were compressed into sedimentary rock. The buried salt moved under the pressure of the overlying sediment like toothpaste in a tube. As the salt moved, it ran into underground faults or barriers that caused the salt to go upward. Near the earth's surface, the salt formed what looked like long giant bubbles in the upper layers. The overlying rocks did not bend as easily as the salt did, and so they cracked in parallel fractures. Over time, water ran into these cracks and dissolved much of the salt below. The rock on top soon had nothing to hold it up. It collapsed on itself, similar to a badly-baked loaf of bread.

Water carried away sand grains one by one and widened the cracks into narrow canyons. Today, the thin rock walls between these canyons are called fins, because they look something like a fish's fins. In cooler months, water in the form of rain and snow enters tiny cracks in the fins, freezes and expands, and causes little pieces of sandstone to flake off. After a long time, the tiny cracks break all the way through the fin and an arch is formed. Arches are still forming today, and many ages and sizes of arches are found throughout the park. How were arches formed? Over time, parallel fractures in surface rock eroded to form "fins." As the process of erosion continued, arches were created where the fins were worn completely through.

In 1973 it was decided that in order for a hole in the rock to be considered an arch it had to have an opening of at least three feet. Even if the opening is one inch high, as long as it is three feet long, it counts as an arch. While you are visiting the park, keep your eyes open because if you find a new arch, you get to name it. Many arches have been named for their shapes such as Pork Chop arch and Piano Leg arch. There are over 2000 documented arches in the park and probably some more to be found!

Arches lies near the heart of a desert called the "Colorado Plateau." Deserts form when weather patterns or geographic land forms create an environment where lack of water limits biotic productivity. Water may exist in an unusable form such as ice, or may be absent altogether. There are four basic types of desert: high pressure, rain shadow, interior continental and coastal. High pressure deserts generally form at the middle latitudes (30 degrees) in each hemisphere where warm, dry air masses descend toward the earth's surface. Rain shadow deserts form in localized high pressure zones caused by warm, dry air descending from mountain ranges.

The Colorado Plateau is also in the interior of a large continent, far away from significant water sources. Because of the elevations throughout the region, with a mean of around 3,000 feet and peaks over 12,000 feet above sea level, the Colorado Plateau is also known as a cold or high desert. Though low humidity allows greater penetration of solar radiation, winter air temperatures frequently drop below freezing. In turn, summertime air and especially ground temperatures can reach levels lethal for many organisms. After sunset, the ground rapidly loses heat to the night sky and ambient air temperatures may drop significantly before dawn.

Temperature fluctuations of over 40 degrees in a 24-hour period are not uncommon. Arches receives more precipitation than many other deserts: about 9 inches annually. August is generally the wettest month, as weather systems from the southwest bring brief, intense tropical storms. However, precipitation is highly variable both temporally and spatially. During a single storm, one area may receive significantly more or less water than a neighboring spot less than a mile away.

Arches National Park lies atop an underground salt bed called the "Paradox Formation" which is responsible for the arches, spires, balanced rocks, fins and eroded monoliths common throughout the park. Thousands of feet thick in places, the Paradox Formation was deposited over 300 million years ago when seas flowed into the region and eventually evaporated. Over millions of years, the salt bed was covered with the residue of floods and winds as the oceans returned and evaporated again and again. Much of this debris was cemented into rock. At one time this overlying layer of rock may have been more than a mile thick. Salt under pressure is unstable, and the salt bed below Arches began to flow under the weight of the overlying sandstones.

This movement caused the surface rock to buckle and shift, thrusting some sections upward into domes, dropping others into surrounding cavities, and causing vertical cracks which would later contribute to the development of arches. As the subsurface movement of salt shaped the surface, erosion stripped away the younger rock layers. Water seeped into cracks and joints, washing away loose debris and eroding the "cement" that held the sandstone together, leaving a series of free-standing fins. During colder periods, ice formed, its expansion putting pressure on the rock, breaking off bits and pieces, and sometimes creating openings.

Many damaged fins collapsed. Others, with the right degree of hardness and balance, have survived as the world famous formations of Arches National Park. Faults deep in the Earth also contributed to the instability on the surface. The result of one such 2,500-foot displacement is called the Moab Fault and is visible from the Arches Visitor Center. Salt Valley was also formed by such a displacement. Except for isolated remnants, the major rock formations visible in the park today are the salmon-colored Entrada Sandstone, in which most of the arches form, and the tan-colored Navajo Sandstone.