Located in southwestern South Dakota, Badlands National Park consists of 244,000 acres of sharply eroded buttes, pinnacles and spires blended with the largest, protected mixed grass prairie in the United States. The Badlands Wilderness Area covers 64,000 acres and is the site of the reintroduction of the black-footed ferret, the most endangered land mammal in North America.

The Stronghold Unit is co-managed with the Oglala Sioux Tribe and includes sites of 1890s Ghost Dances. Established as Badlands National Monument in 1939, the area was re-designated "National Park" in 1978. Over 11,000 years of human history pale to the ages old paleontological resources. Badlands National Park contains the world's richest Oligocene epoch fossil beds, dating 23 to 35 million years old. Scientists can study the evolution of mammal species such as the horse, sheep, rhinoceros and pig in the Badlands formations. 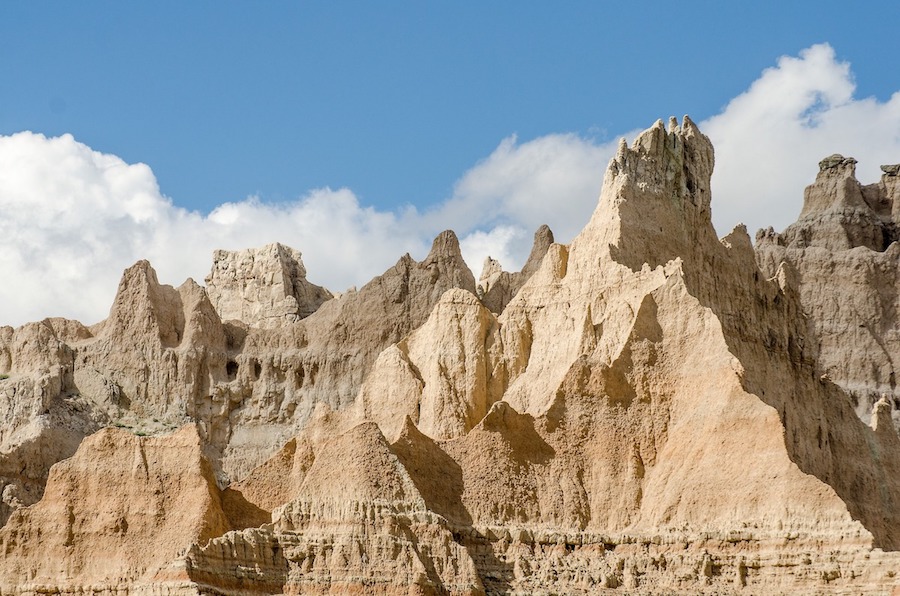 Badlands National Park preserves a diversity of significant resources for the education and inspiration of a world audience. These resources are a blending of the best known Oligocene fossil deposits contained within archetypical Big Badlands formations, a rich and varied cultural history spanning from paleo-Indian occupation through the early twentieth century homesteading period, and a fine expanse of a mixed grass prairie ecosystem. Other qualities, most notably the wilderness character, clean air, quiet, solitude, vastness, and natural processes, provide visitors with a setting for exploration and appreciation through such experiences as hiking, camping, wildlife viewing, scenic drives and vistas, research and educational opportunities, and quiet contemplation. More about Badlands Mission

The bizarre landforms called badlands are, despite the uninviting name, a masterpiece of water and wind sculpture. They are near deserts of a special kind, where rain is infrequent, the bare rocks are poorly consolidated and relatively uniform in their resistance to erosion, and runoff water washes away large amounts of sediment. On average, the White River Badlands of South Dakota erode one inch per year. They are formidable redoubts of stark beauty where the delicate balance between creation and decay, that distinguishes so much geologic art, is manifested in improbable landscapes - near moonscapes - whose individual elements seem to defy gravity. Erosion is so rapid that the landforms can change perceptibly overnight as a result of a single thunderstorm. More about Badlands Geology

The Badlands are home to several kinds of herd animals. Mule deer are by far the most common animal to see on a drive through the park, but some visitors may also see white-tailed deer. Visitors should keep their eyes peeled for three less common animals of the Plains: bison, bighorn sheep, and pronghorn. More about Wildlife

Cyclists who prefer paved roads may want to ride on a portion of the park's main loop road. Remember that the road can be quite steep. If you have an automobile shuttle available, you may want to begin your ride at the Pinnacles Overlook, 8 miles south of the town of Wall and end your ride at the Ben Reifel Visitor Center. This 22 mile route is mostly downhill, although there are several steep passes that you must climb. Where to Ride

Bicycles are allowed only on designated paved, gravel, and dirt roads within the park. Bicycling and Mountain Biking

Paleontology is, simply put, the study of ancient life. It is not exclusively the study of fossils; however, fossils are the primary resources used by scientists to study past life forms. The White River Badlands of South Dakota are considered to be the birthplace of the science of vertebrate paleontology. Badlands National Park is very active in conducting field research through partner universities. The park has a full time professional paleontologist, as well as an active agreement with the South Dakota School of Mines for fossil preparation. Badlands National Park formations date from the late Eocene and Oligocene epochs, the Age of Mammals. Although some are disappointed when they learn that Badlands National Park is not home to dinosaurs, the rich diversity of extinct mammal life becomes fascinating. Ancestors of the modern day rhinoceros, horse, pig, cat, and many other species are present. There are also early birds, reptiles, and invertebrates found in various strata. Explore more about Paleontological Research in Badlands