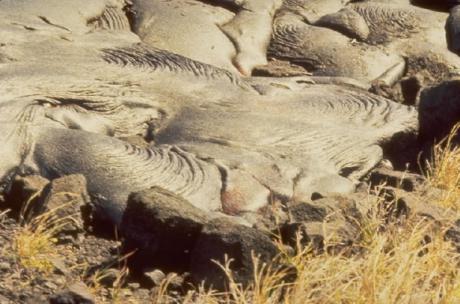 Contains the world's most massive mountain, Mauna Loa at 13,677 feet and Kilauea, the world's most active volcano. Measured from its base on the seafloor, Mauna Loa rises over 30,000 feet, more than a thousand feet higher than Mount Everest. In contrast to explosive continental volcanoes, the more fluid and less gaseous eruptions of Kilauea and Mauna Loa produce awe inspiring, fiery fountains and rivers of molten lava that visitors can observe from a safe distance. Kilauea produces enough volcanic material every day to cover a football field to the height of the Washington Monument.

Volcanoes are monuments to earth's origin, evidence that its primordial forces are still at work. During a volcanic eruption, we are reminded that our planet is an ever-changing environment whose basic processes are beyond human control. As much as we have altered the face of the earth to suit our needs, we can only stand in awe before the power of an eruption. 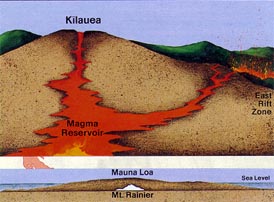 Volcanoes are also prodigious land builders (they have created the Hawaiian Island chain). Kilauea and Mauna Loa, two of the world's most active volcanoes, are still adding land to the island of Hawaii. Mauna Loa is the most massive mountain on earth, occupying an area of 10,000 cubic miles. Measured from its base on the seafloor, it rises 30,000 feet, more than a thousand feet higher than Mount Everest. In contrast to the explosive continental volcanoes, the more fluid and less gaseous eruptions of Kilauea and Mauna Loa produce fiery fountains and rivers of molten lava.

These flows, added layer upon layer, produced a barren volcanic landscape that served as a foundation for life. Hundreds of species of plants and animals found their way across the vast Pacific on wind, water, and the wings of birds. A few survived, adapted, and prospered during this time of isolation. The arrival of humans, first Polynesians, then Europeans, and the plants and animals they brought with them drastically altered this evolutionary showcase, this grand natural experiment.

Today Hawaii Volcanoes National Park displays the results of 70 million years of volcanism, migration, and evolution - processes that thrust a bare land from the sea and clothed it with complex and unique ecosystems and a distinct human culture. Created to preserve the natural setting of Kilauea and Mauna Loa, the park is also a refuge for the islands native plants and animals and a link to its human past. Park managers work to protect the resources and promote understanding and appreciation of the park by visitors. Research by scientists at the Hawaiian Volcano Observatory has made Kilauea one of the best understood volcanoes in the world, shedding light of the birth of the Hawaiian Islands and the beginning of planet Earth.