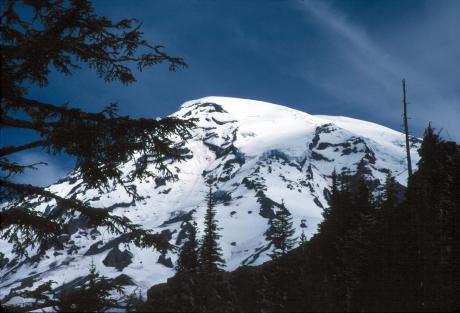 Mount Rainier has the largest collection of glaciers on one peak in the contiguous U.S. The mountain has 25 named glaciers and 50 smaller, unnamed glaciers and ice fields. In the Lower 48, Mount Rainier National Park has the thickest and most voluminous glacier, Carbon Glacier, and the glacier with the greatest surface area Emmons Glacier. It is one of the most accessible places to view glaciers up close.

Welcome to a mountain wonderland of dense forests, dazzling wildflowers, tremendous snowfields, and rugged glaciers. Enjoy the fresh smell of trees and soil, the soothing - and sometimes deafening - sound of falling water, and the refreshing cold breezes off the glaciers. And towering above all this scenic display is magnificent Mount Rainier.

This is a complex landscape, but the explanation of its origins are simplicity itself: fire and ice. The mountain is a volcano born of fire and built up above the surrounding country by repeated eruptions and successive flows of lava. It is a relatively young volcano, only about one million years old. By contrast the mountains of the Cascade Range that Mount Rainier looks down upon are at least 12 million years old, created by the folding, buckling, and uplifting of the Earth's surface. Mount Rainier is not an isolated volcano, for from Lassen Peak in California to Mount Garibaldi in British Columbia an entire line of volcanoes defines the north-south march of the Cascades. These peaks dominate the skyline, ever a reminder that they are only dormant and may at any time, like Lassen Peak in 1914-21, and Mount Saint Helens in 1980, erupt in fury and rage at the fragile world built by humans. One of the unexpected side benefits of these eruptions has been the deposition of ash and pumice layers that are rich in nutrients and support the abundance of wildflowers throughout the mountainous Pacific Northwest.

Even as volcanic forces were building up this land, the slow, inevitable power of glacial ice began to shape and form it. Glaciers come from the snow that does not melt from year to year: it accumulates to greater and greater depths. The weight of the snow presses the air out, packs it down tight, and compresses it into ice. Gravity pulls the ice down the mountainside, both scouring and smoothing the bedrock as it goes. Freezing and thawing breaks rocks from the adjacent slopes, and they fall onto the glacier's surface. More debris is picked up by the passing ice. This is an inexorable process that continues today and will alter the mountain in the tomorrows to come. Yes, the process is simple, but it deals in forces that are beyond the control, and perhaps comprehension, of humans. Take a look at this mountain; it may be gone in a million years.

The volcanoes in the north- south trending Cascade Province evolved through a history of complex plate tectonic processes and glaciation. Different tectonic models have been proposed for the development of the Cascades, but all models include subduction, addition of exotic terranes, and oblique plate movements as important components in creating today's Cascade Range (Kiver and Harris, 1999). In general, the North American plate edge was located farther east during the Mesozoic in Nevada, western Idaho, and eastern Washington. Subduction processes added larger masses of continental materials, island- like masses called microcontinents, microplates, or exotic terranes to the western margin of North American. Addition of these microplates shifted the plate edge westward.

The first Cascade volcanoes erupted about 42 million years ago (Ma), forming the older Western Cascades. At the time, the range was oriented northwesterly but would later rotate clockwise to achieve today's north- south orientation. Continued subduction formed rows of volcanic vents that become younger to the east. As a result of clockwise rotation, extensive fissures opened up to the east and voluminous eruptions of the Columbia River Basalt occurred about 17 Ma.

Subduction and accompanying volcanism continued for some 25 million years in the older Cascade Range. As magma rose, rocks were heated and began to expand. Large lithospheric blocks dropped downward along north- south oriented faults creating linear depressions, or grabens (fault- bounded basins). The faults opened pathways that enabled large volumes of magma to rise. The grabens filled and overflowed with overlapping shield and cinder cones to form a volcanic plateau called the Eastern, or High, Cascades.

The present generation of volcanoes is believed to be no more than 400,000- 600,000 years old. Mount St. Helens was formed only 40,000 years ago. Coincident with the growth of these recent volcanoes was the Pleistocene Ice Age, which began about 1.6 Ma. Glaciers formed on each volcanic cone when it reached sufficient height. At the peak of glaciation, a continuous icecap buried the upper Cascades from Canada to northern California, broken only in the Columbia Gorge area where elevations approached sea level (Kiver and Harris, 1999). Alpine glaciers on Mount Rainier flowed as far as 65 miles (105 km) from the mountain. Most of the glacial sculpturing seen today occurred during the Wisconsin glacial stage, which reached its maximum only 15,000- 20,000 years ago.

For Mount Rainier National Park, the terrestrial history begins in the Tertiary Period of the Cenozoic Era in the Eocene Epoch, 36.6- 52 Ma. 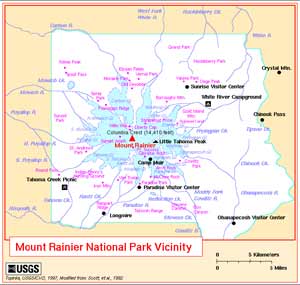 Towering 1.5 miles (2.4 km) above the surrounding mountains and about 3 miles (5 km) above the lowlands to the west, Mount Rainier is the second highest peak in the conterminous United States at 14,410 ft (4393 m). Mount Rainier also has the distinction of having the greatest single- peak glacial system in the United States. Over 35 square miles (91 sq km) of snow and ice cover this active volcano. Glaciers radiate from its summit so that its rocky, ice- mantled slopes above timberline contrast vividly with the green, verdant forests that include old growth trees. The snowfields, alpine tundra with vivid alpine flowers, and dense forests provide the park visitor with a variety of visitor experiences. In 1899, 235,625 acres were set aside as Mount Rainier National Park and today, 97% of this area is designated wilderness

The Native Americans know the mountain as Tahoma or Takhoma or Ta- co- bet, names meaning "Snow Mountain" or the "Mountain that was God" or "Place where the Waters Begin". These names are more descriptive and perhaps capture the mountain's impact on the surrounding region better than the European moniker "Rainier", a name bestowed on the mountain by Captain Vancouver in 1792 in honor of his friend and superior officer, Rear Admiral Peter Rainier.

In terms of its potential impact on human populations, this "mountain of fire and ice" is the most dangerous volcano in the Cascade Range. In the shadow of Mount Rainier, live over 1.5 million people. The glaciers on Mount Rainier provide a steady flow of water for hydroelectric power in the region, regardless of the season. However, should an eruption occur, these 35 acres of ice and snow could melt and send debris flows towards Puget Sound and the Seattle/Tacoma metropolitan area.

Glaciers are highly effective erosional agents, shaping mountains into picturesque landforms with such distinctive erosional features as horns (peaks), cirques (deep, bowl- shaped, steep- walled recesses in a mountain), glacial valleys (U- shaped valleys), and ar'tes (rugged crests or ridges between two mountains). Tipsoo Lake, Crescent Lake, and Mowich Lake are examples of cirque lakes at MORA. Some tributary streams end as waterfalls at the mouth of hanging valleys like Christine Falls and Comet Falls. Carved by glaciers, hanging valleys are erosional features in which the floor of the valley is notably higher than the level of the valley to which it leads. Most of the glacial landforms on Mount Rainier are the result of Pleistocene glaciers that formed 25,000 to 10,000 years ago and continue to erode the mountain today.