Joshua Tree National Park is made up of two deserts, two large ecosystems primarily determined by elevation. This desert is immense and infinitely variable and yet also delicately fragile. The land here may seem to appear defeated and dead, but within its parched environment are intricate living systems, each fragment performing a slightly different function.

The Colorado Desert and Mohave Desert meet to create a spectacular environment. Standing like islands in a desolate area, the oases, a third ecosystem, provide dramatic contrast to their arid surroundings. Five fan-palm oases dot the park, indicating those few areas where water occurs naturally at or near the surface.

As old as Joshua Tree's desert looks, it is a temporary phenomenon in the incomprehensible time-scale of geology. In more verdant times, one of the Southwest's earliest inhabitants, Pinto Man, lived here, hunting and gathering along a slow mo8-ving river that ran through the now dry Pinto Basin. Later, Indians traveled through this area in tune with harvests of pinyon nuts, mesquite beans, acorns, and cactus fruit, leaving behind rock paintings and pottery ollas as reminders of their passing. In the late 1800's explorers, cattlemen, and miners came to the desert. They built dams to create water tanks and dug up and tunneled the earth in search of gold. Although they are gone now, they left behind their remnants, the Lost Horse and Desert Queen Mines and the Desert Queen Ranch.

Viewed from the roadside, the desert only hints at its hidden vitality. to the close observer, Joshua Tree National Park is an abundance of wildflowers, wildlife, solitude and a place of self discovery. 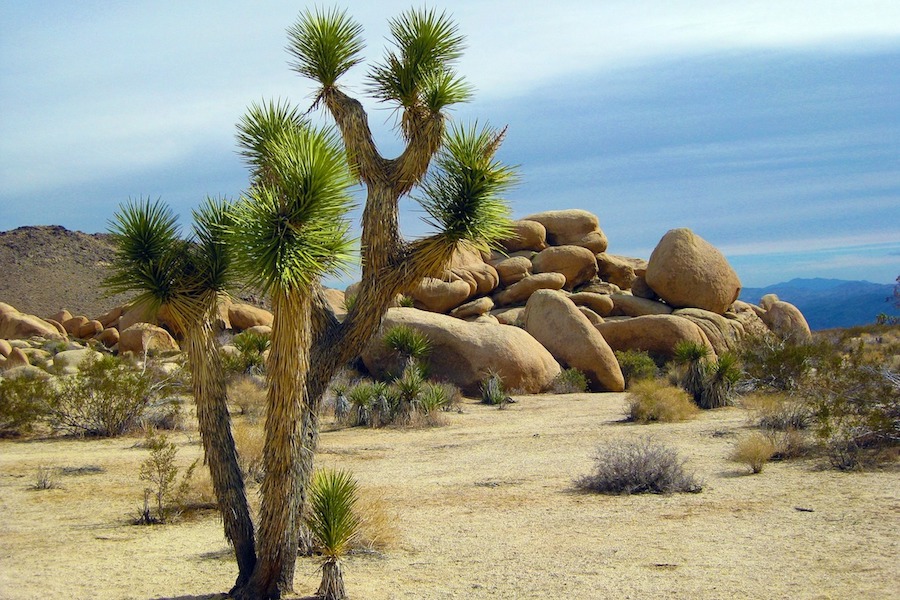 At the edges of daylight and under clear night stars is a fascinating multitude of generally unfamiliar desert wildlife. Waiting out daytime heat, these creatures run, hop, crawl and burrow in the slow rhythm of desert life. Under bright sun and blue sky, bighorn sheep and golden eagles add an air of unconcerned majesty to this land.

Joshua Tree National Park has quickly become one of the world's most famous destinations for rock climbing. More than 4,500 established routes offering a wide range of difficulty are concentrated within about 100,000 acres of park land. Over one million people visit Joshua Tree each year, many of them rock climbers.

This park is named after them, so what are they? The Joshua Tree can survive a couple hundred years in this desert environment. These trees are usually confined to the Mojave Desert between 2,000 and 6,000 feet. Learn more about these amazing trees here!