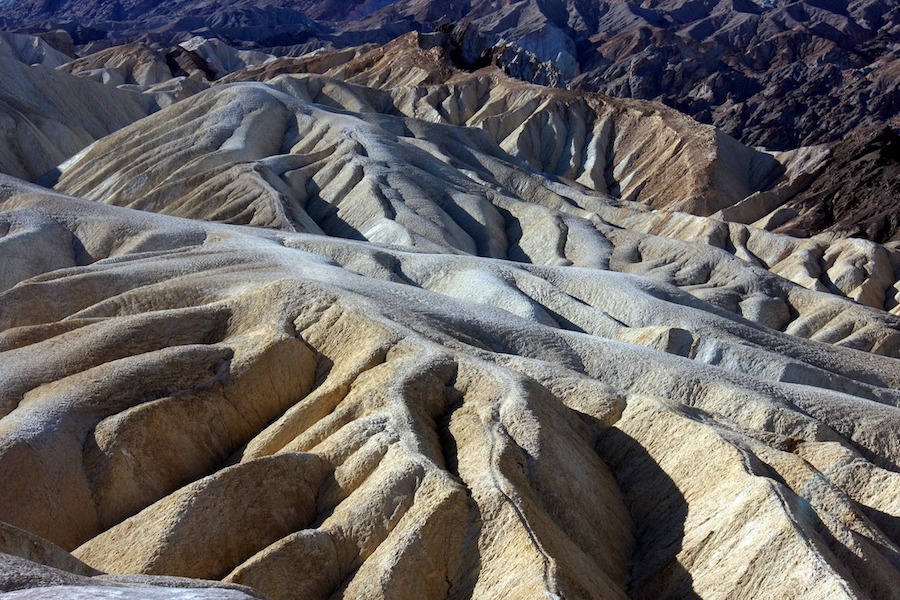 National Parks in the United States

Arches National Park preserves over two thousand natural sandstone arches, including the world-famous Delicate Arch, in addition to a variety of unique geological resources and formations. In some areas, faulting has exposed millions of years of geologic...

Big Bend merges natural environments from desert to mountains. It is a place where south meets north and east meets west, creating a great diversity of plants and animals.

The 10,000 year human history of the place reflects its temperamental nature. Some days, Biscayne Bay's shallow waters are glassy smooth, other times, the wind whistles and whips, creating white waves.

Black Canyon of the Gunnison

The Black Canyon of the Gunnison's unique and spectacular landscape was formed slowly by the action of water and rock scouring down through hard Proterozoic crystalline rock.

Canyonlands National Park preserves a colorful landscape of sedimentary sandstones eroded into countless canyons, mesas and buttes by the Colorado River and its tributaries.

The Waterpocket Fold, a 100-mile long wrinkle in the earth's crust known as a monocline, extends from nearby Thousand Lakes Mountain to the Colorado River (now Lake Powell). Capitol Reef National Park was established to protect this grand and colorful...

Established to preserve Carlsbad Cavern and numerous other caves within a Permian-age fossil reef, the park contains 100 known caves, including Lechuguilla Cave the nation's deepest limestone cave at 1,567 feet (478m) and third longest.

Comprised of five in a chain of eight southern California islands near Los Angeles, Channel Islands National Park is home to a wide variety of nationally and internationally significant natural and cultural resources. The park consists of 249,354 acres...

The monument rests on a floodplain of the Congaree River and is not a true swamp. This remnant preserves the largest intact tract of old-growth bottomland hardwood forest in the United States.

Crater Lake is widely known for its intense blue color and spectacular views.

Seven islands, composed of coral reefs and sand, are called the Dry Tortugas. Along with the surrounding shoals and waters, they make up Dry Tortugas National Park. The area is known for its famous bird and marine life, and its legends of pirates and sunk...

Spanning the southern tip of the Florida peninsula and most of Florida Bay, Everglades National Park is the only subtropical preserve in North America. The park is known for its rich bird life. It is also the only place in the world where alligators and...

Gates of the Arctic

By establishing Gates of the Arctic National Park and Preserve (GAAR) in Alaska, Congress has reserved a vast and untouched area of superlative natural beauty and exceptional scientific value - a maze of glaciated valleys and rugged mountains covered with...

Glacier preserves over 1,000,000 acres of forests, alpine meadows, and lakes. It is home to over 70 species of mammals and 260 species of birds. The spectacular glaciated landscape is a hikers paradise.

Glacier Bay National Park and Preserve provides opportunities for adventure, a living laboratory for observing the ebb and flow of glaciers, and a chance to study life as it returns in the wake of retreating ice. The park has snow-capped mountain ranges...

One of the most spectacular examples of erosion anywhere in the world, Grand Canyon is unmatched in the incomparable vistas it offers to visitors on the rim.

World renowned for the diversity of its plant and animal life, the beauty of its ancient mountains, the quality of its remnants of Southern Appalachian mountain culture, and the depth and integrity of its wilderness sanctuary, the park attracts over nine...

This mountain mass contains portions of the world's most extensive and significant Permian limestone fossil reef. Also featured are a tremendous earth fault, lofty peaks, unusual flora and fauna, and a colorful record of the past. Guadalupe Peak, highest...

The Park preserves the outstanding volcanic landscape of the upper slopes of Haleakala on the island of Maui.

Hawaii Volcanoes National Park encompasses diverse environments that range from sea level to the summit of the earth's most massive volcano, Mauna Loa at 13,677 feet.

Congress established Hot Springs Reservation on April 20, 1832 to protect hot springs flowing from the southwestern slope of Hot Springs Mountain. This makes it the oldest park currently in the National Park System.

Two deserts, two large ecosystems whose characteristics are determined primarily by elevation, come together at Joshua Tree National Park. The Colorado Desert encompasses the eastern part of the park and features natural gardens of creosote bush...

Katmai is famous for volcanoes, brown bears, fish, and rugged wilderness and is also the site of the Brooks River National Historic Landmark with North America's highest concentration of prehistoric human dwellings (about 900).

The Kenai Fjords reflect scenic icebound landscapes in which salt spray mixes with mountain mist. Located on the southeastern Kenai Peninsula, the national park is a pristine and rugged land supporting many unaltered natural environments and ecosystems.

The park povides protection for several important geographic features, including the central portion of the Kobuk River, the 25-sqaure-mile Great Kobuk Sand Dunes, and the Little Kobuk and Hunt River dunes.

Lake Clark National Park and Preserve is a composite of ecosystems representative of many regions of Alaska. The spectacular scenery stretches from the shores of Cook Inlet, across the Chigmit Mountains, to the tundra covered hills of the western interior...

Lassen Volcanic became a national park in 1916 because of its significance as an active volcanic landscape. All four types of volcanoes in the world are found in the park. Over 150 miles of trails and a culturally significant scenic highway provide access...

Mammoth Cave National Park was established to preserve the cave system, including Mammoth Cave, the scenic river valleys of the Green and Nolin rivers, and a section of south central Kentucky.

The archeological sites found in Mesa Verde are some of the most notable and best preserved in the United States. Mesa Verde National Park offers visitors a spectacular look into the lives of the Ancestral Pueblo people.

The park contains Mount Rainier (14,410'), an active volcano encased in over 35 square miles of snow and ice, and outstanding examples of old growth forests and subalpine meadows.

Petrified Forest features one of the world's largest and most colorful concentrations of petrified wood. Also included are the multi-hued badlands of the Chinle Formation known as the Painted Desert, historic structures, archeological sites and displays...

Rising out of the chaparral-covered Gabilan Mountains, are the spectacular remains of an ancient volcano. Massive monoliths, spires, sheer-walled canyons and talus passages define millions of years of erosion, faulting and tectonic plate movement.

Redwood National and State Parks are home to some of the world's tallest trees: old-growth coast redwoods. The parks' mosaic of habitats include prairie/oak woodlands, mighty rivers and streams, and 37 miles of pristine Pacific coastline.

The park exhibits the massive grandeur of the Rocky Mountains. Trail Ridge Road crosses the Continental Divide and looks out over dozens of peaks that tower more than 13,000 feet high. The high point on Trail Ridge Road is 12,183'. .Longs Peak, the highes...

This unique desert is home to the most recognizable cactus in the world, the majestic saguaro. Saguaro cacti provide their fruits to hungry desert animals. They also provide homes to a variety of birds. With an average life span of 150 years, a mature...

Shenandoah National Park lies astride a beautiful section of the Blue Ridge Mountains, which form the eastern rampart of the Appalachian Mountains between Pennsylvania and Georgia.

Theodore Roosevelt National Park is in the colorful North Dakota badlands and is home to a variety of plants and animals, including bison, prairie dogs, and elk.

Virgin Islands National Park's hills, valleys and beaches are breath-taking. However, within its 7,000 plus acres on the island of St. John is the complex history of civilizations...

The park represents some of the oldest exposed rock formations in the world. The topography of the park is rugged and varied; rolling hills are interspersed between bogs, beaver ponds, swamps, islands, small lakes and four large lakes. Voyageurs...

Wind Cave National Park preserves one of the world's longest and most complex caves and 28,295 acres of mixed-grass prairie, ponderosa pine forest, and associated wildlife.

The park-preserve includes the continent's largest assemblage of glaciers and the greatest collection of peaks above 16,000 feet. The site is characterized by remote mountains, valleys, wild rivers, and a variety of wildlife.

Geothermal wonders, such as Old Faithful, are evidence of one of the world's largest active volcanoes. After exploration Congress decided that the area known as Yellowstone needed to be protected and preserved.

Yosemite National Park harbors a grand collection of waterfalls, meadows, and forests that include groves of giant sequoias, the world's largest living things.

Protected within the park's 229 square miles is a dramatic landscape of sculptured canyons and soaring cliffs.