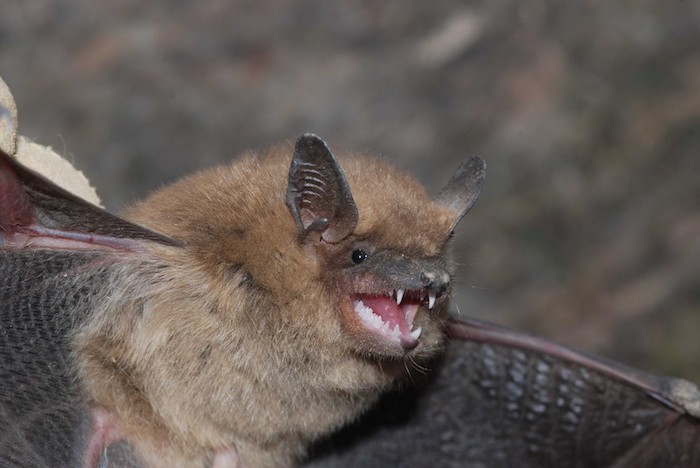 This is a large bat with medium-sized, rounded ears. The wings are long (325-350 mm) and powerful. Color is always some shade of brown, varying from russet to almost black and chocolate. This is the most commonly encountered bat in Colorado. Average measurements of 10 females from Fort Collins were: total length, 115 mm; forearm, 48 mm; and weight, 17 g.

The big brown bat is found widely in the New World, from Alaska to South America. It can be found throughout the United States in a variety of habitats. In Colorado it can be encountered just about everywhere, especially in towns and cities.

The big brown bat is more closely associated with humans and development than any bat in North America. It is often found in cities and towns and around structures. The big brown bat congregates in large groups in summer, and when these groups take up temporary residence in an attic, they can be both an annoyance and an effective control on flying insects. They also use rock crevices and trees for roosting. Temperature seems to be a factor in roost selection, females preferring higher temperatures than males. Big brown bats are year-round residents of Colorado, hibernating in rock crevices, mines, caves, and a variety of other places. Prior to hibernation, they store up to 30 percent of their body weight in fat reserves. This bat has been studied widely for its remarkable homing ability. It can return to its roost site from distances of over 400 miles in less than a month, and returns of up to 40 miles in a single night are known.

Big brown bats are generalist insect feeders. They eat a variety of larger, flying insects and prefer beetles, even some too large for these bats to fly away with. Given their habit of living near humans, they are important in keeping urban insect populations under some control. Studies indicate that big brown bats eat many insects considered detrimental to humans. When big brown bats emerge to forage in the evening, they make a strong, straight flight at a height of 20-30 feet above the ground. This flight is highly predictable, and the groups can be seen at the same location for weeks at a time. Foraging is generally in open areas, where they may work eight circuits while catching insects.

As with most Colorado bats, mating occurs in the fall, the sperm is stored over winter in the female's uterus and the young are born in midsummer, following a gestation of approximately two months. In the West, a single young per year is generally the rule; twins are common in the East. Females aggregate in maternity colonies of up to several hundred individuals. Mothers apparently can recognize their own offspring even in masses of newborn bats. When young bats occasionally fall to the ground or floor, there is evidence that mothers recover them and put them back in the roost. Female big brown bats will move their young from one roost site to another if disturbed.

​The big brown bat is beneficial to humans, but it has suffered both because and in spite of itself. The insecticide DDT, once used in this country to control problem insects, is highly toxic to big brown bats. Ironically, a natural insect control was destroyed by humans in their efforts to control insects artificially.