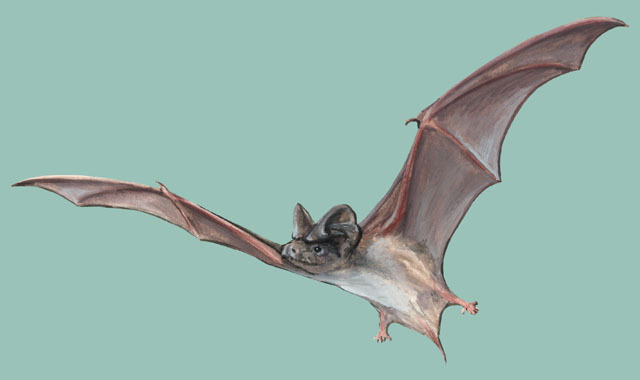 Like the Brazilian free-tailed bat, these animals have a tail that extends well beyond the uropatagium. This bat is much larger than the Brazilian free-tailed bat, and its ears join at the midline of the forehead. Color varies from pale brown to black. Wingspan is approximately 425 mm. Average measurements are: total length, 140 mm; length of ear, 25 mm; length of forearm, 60 mm.

The big free-tailed bat occurs mainly in southern California, Arizona, New Mexico, Texas and Mexico. Relatively few individuals have been documented in Colorado, on both sides of the Continental Divide and as high as Gunnison (at 7,700 feet). Long thought to be an accidental wanderer in Colorado, recent data now suggest the presence of breeding colonies has been confirmed in western Colorado.

This bat frequents rocky or canyon country where it roosts in crevices of high cliff faces. This migratory species is a swift, powerful flier, and occasional individuals wander as far north as Canada. Little is known of mortality and longevity.

Moths seem to be the mainstay of their diet, although little data has been collected. This bat emerges late in the evening and forages at high altitudes.

Breeding probably occurs in midwinter while the species is in warmer latitudes. A single young is born in mid-June to early July. Females form nursery colonies, and the young do not leave the nursery until they are almost full grown.