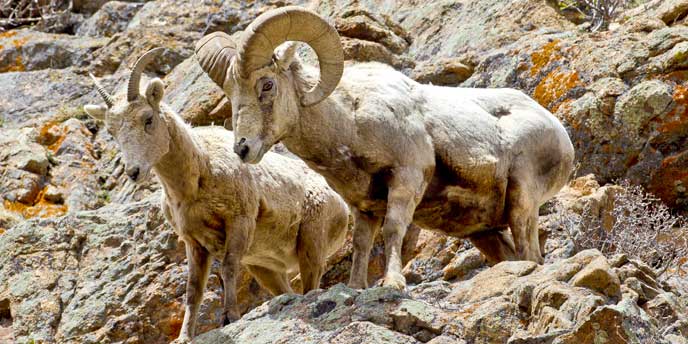 The bighorn sheep is the mammalian symbol of Colorado Parks and Wildlife and Colorado's official animal. Colorado is home to the largest population of the species anywhere. The animals are five to six feet long with a tail three to six inches in length. Rams weigh 150-250 pounds, ewes 120-200. Males are about three feet high at the shoulder, ewes slightly less. Color is usually grayish brown, with a paler belly and a white rump patch. The massive, coiled horns of mature rams may make up to 10 percent of the body weight. Ewes have spike-like horns.

"Brooming" is the term used to describe the chipping and fraying of horns, usually caused by fighting. Some brooming may be caused by accidents or digging. Rams achieve "full curl" at about seven or eight years of age. Usually, bighorn sheep are diurnal, being active during daylight and exhibit little nocturnal (nighttime) activity. Adult rams stay segregated from ewes, except during the rut. Young rams join bands of rams when they are two to three years old. Rams battle each other, cracking horns, to test dominance within the herd.

Hunting bighorns is carefully regulated. Parasitic disease is common in bighorns. Coyotes, mountain lions and eagles prey on them, and some bighorns succumb to accidental falls.

There are two species of bighorn in Colorado, the Rocky Mountain, which is native, and the desert bighorn, introduced near Colorado National Monument in 1979. Colorado herds are widely scattered throughout the mountains and foothills of the state. In North America, species of bighorn occur from South British Columbia, southwest Alberta, Idaho and Montana to southeast California, Arizona and New Mexico.

Bighorns typically occur in steep, high mountain terrain. In Colorado, they prefer habitat dominated by grass, low shrubs, rock cover and areas near open escape. They often retreat to rest on inaccessible cliffs. Many bands now spend all year near timberline on what used to be their traditional summer range.

Bighorn are primarily grazers, feeding in meadows, open woodland, and alpine tundra. However, they will also eat forbs (herbaceous plants) in the summer and browse in the winter. Grasses eaten by bighorn include bluegrass, sedges, wheat grass, bromes and fescues. Browse includes willow, mountain mahogany, winterfat and bitter brush. Forbs include clover, cinquefoil and phlox.

Gestation averages five to six months or about 175 days. Breeding occurs in November and December with a peak in early December. Lambs are born April through July, with the peak in late May and early June. A single lamb is the norm. Lambs can climb as well as their mothers when they are only a day old. Lambs are weaned at about four months, and sometimes as early as one month. All teeth are permanent by four years old. Bighorns can live to be 15 to 20 years old, but seldom do in the wild. Ewes usually live to be 10 to 12 years old. Rams seem to have a somewhat higher mortality rate.