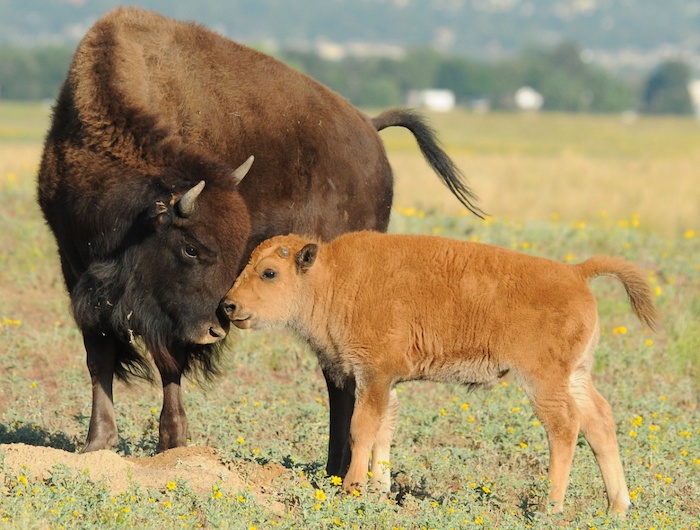 On November 5th, we have a more reasons than ever to celebrate National Bison Day. In fact, 2016 may be remembered as the "year of the bison". But myriad stories, ultimately tracing back evolutionarily through millennia, pay tribute to the American bison's remarkable comeback from human-imposed devastation to preservation, conservation and national commemoration. The Bison Bellows essay series began to chronicle these diverse stories weekly, beginning a year ago on National Bison Day in 2015, in honor of the National Park Service's Centennial year. This Bellows essay marks the end of the series, but the remarkable story of bison carries on into the future.

Once numbering roughly 40 million individuals ranging from Canada to Mexico and New York to California, bison populations fell to a mere 1,000 individuals after extreme hunting pressures in the late 19th century. A handful of pioneering preservationists stepped up to protect the few small isolated herds that managed to avoid the slaughter, ultimately saving the species from extinction. Despite the genetic bottleneck that these surviving bison endured, this remarkably resilient animal has since thrived as a keystone herbivore in grassland ecosystems; in captivity, raised for food and fiber; and as a cultural icon representing resilience, unity and healthy landscapes and people.

Today, federal agencies, tribes and tribal entities, private landowners, NGOs and other dedicated bison advocates are unified in efforts to conserve and manage bison for a variety of purposes. Over 12,000 plains bison are managed in 19 conservation herds over more than 4 million acres of federal lands stewarded by the National Park Service, U.S. Fish and Wildlife Service, and Bureau of Land Management; additional conservation herds are collaboratively managed by states, NGOs and tribes. The InterTribal Buffalo Council is helping to restore bison on tribal lands, revitalizing American Indian cultural connections to bison and incorporating healthy bison meat in school lunch programs. Private bison producers are raising bison for meat, wool and other bison-based commodities in all 50 states. Bison are also contributing to the ecological conservation of both plant and animal species such as the endangered Karner blue butterfly and restoring more heterogeneous grazing patterns that increase biodiversity on tallgrass prairies.

In 2016, several historic events elevated the profile and status of bison to new heights, underscoring the momentum of a new era of bison recovery. In April, the Blackfeet Nation helped bring a herd of 87 bison from Elk Island National Park in Canada back to their native home lands from which they originated on the Blackfeet Reservation in Montana. The multifaceted connection between society, culture, and the environment brought representatives from both sides of the aisle together to support the National Bison Legacy Act, which passed both the House and Senate and was signed into law and declared bison our national mammal in May of 2016! And in September, bison conservationists met at the American Bison Society conference in Banff, Alberta to discuss the social and human dimensions of bison conservation, in addition to other topics including population viability and conservation of federal and tribal herds; concurrently, 15 Native American tribes and First Nations people convened to renew or become new signatories in support of the second anniversary of the Buffalo Treaty. There is no doubt that in 2016 we can say with confidence that bison are back, resilient as ever, bringing people together to correct our past mistakes of nearly extirpating the largest land mammal of North America.

While this essay is the final installment to the Bellows series, stories of bison and our deep connections to this majestic mammal will carry on into the future (and you can access the 51 prior Bellows stories in archives; see link below). We have only begun to truly embrace and celebrate the symbolic, cultural, ecological and economic values that bison bring to our lives. The future of bison is ever hopeful.

Of all the megafauna species that inhabited Glacier National Park's landscape in northwest Montana in the early 19th century, the American bison and pronghorn antelope are thought to be the only species currently missing. There is historic evidence that bison used the park's extant east-side (i.e., east of the Continental Divide) prairie tongues, at least seasonally. There is also evidence of prehistoric bison kill sites in at least six drainages on the east side of the park. These sites occurred where communal hunting strategies were employed to drive bison into traps (e.g. corrals, wetlands, or snow drifts), where they were then killed. Recently, several new discoveries have expanded our understanding of bison presence and distribution in the park. In 2015, at least 14 individual sites associated with bison (in the form of bison bones and/or skulls) were documented in the St. Mary Valley following a wildfire. A bison skull was located obtruding from a melting glacial ice patch near Otokomi Lake that was carbon-dated to 967+ years BP. Further analysis of the carbon found in the bones suggested that this particular bison had been eating primarily plant matter found in the alpine and subalpine biological zones, indicating that this bison had spent a significant portion of its life living at higher elevations, and not on the plains. An additional partial bison skeleton was recently documented eroding from a cut bank in the Belly River drainage of the park that will also be carbon dated and examined for its type of diet.

In the past, park managers have cautiously supported the return of bison as free-ranging wildlife, while also acknowledging concerns about invasive vegetation, herd abundance and management, genetics, competition with cattle or other large herbivores. Restoration of bison could contribute to a more natural predator-prey dynamics and integrity of the park's grassland ecosystems. Recently, the park met with representatives from the Blackfeet Tribe to discuss the reestablishment of a "wild," free-ranging bison herd on Tribal lands in the Badger-Two Medicine and Chief Mountain areas. The idea of returning bison to this landscape is compelling from many perspectives, including conservation biology and cultural connectivity. It is also a good fit with the nature-based economy model developed by the Blackfeet Tribe. Park officials have agreed to work with Tribes, First Nations, Parks Canada, and conservation partners to develop a shared strategic vision for restoration of this important natural and cultural icon on an international transboundary landscape scale.

There will always remain uncertainty about historic temporal and spatial variability of bison occupancy and movement patterns across the full extent of the species historic range. What we do know is that there were regional areas within the historic range where:

Bison were continually present over long periods of time, Bison likely occurred at low densities, Bison were known to have been present, but then were followed by prolonged absences before reoccurring or remaining absent. Examples of naturally occurring local and regional bison extirpation are evident in the historical and archeological literature. For example, ecological and archeological evidence suggests that periodic extensive drought resulted in multiple intervals spanning decades and centuries, when bison were almost totally absent regionally from the southern plains, with two major periods of absence between BC 5000-2500 and between AD 500-1300. There is compelling evidence that aboriginal peoples also interacted with environmental drivers and stressors to have a strong role in local and regional spatio-temporal distribution and abundance of bison across the historic range.

A more contemporary example of regional extirpation occurred in July of 1842 when Charles Fremont's exploration encountered bison along the shortgrass plains of the Rocky Mountain front. He then continued north along the Cache LaPoudre River (in what is now northern Colorado) into the Laramie high plains nestled between the Medicine Bow Mountains and the Laramie Range (in what is now southeast Wyoming) and encountered a very large regional landscape void of bison and other wildlife like pronghorn antelope. Bison were known to have previously occupied the Laramie high plains, and their bones can still be occasionally found in the surrounding high country.

Fremont later reported that "Everywhere the soil looked parched and burnt; the scanty yellow grass crisped under the foot, and even the hardiest plants were destroyed by want of moisture" and his contact with disparate small bands of Crow Indians who were hunting indicated "that bison were very scarce, and little to no grass to be found." The relatively rapid disappearance of bison from the several thousands of square miles of the Laramie high plains is suggested in response to severe drought combined with swarming grasshoppers, so that by the time Fremont arrived, there was "No grass, no buffalo - food for neither horse nor man." Thus, in response to natural environmental forces in conjunction with environmentally stressed people, by the early 1840s the bison of the Laramie high plains had dispersed or died, ultimately never to return.

A localized example was described by Charles Goodnight how during a drought in 1867, bison gathered on the Colorado River (that drains southeast from out of the Llano Estacado in northwest Texas) and died of starvation by the thousands. He described that while there was good grass on the Rio Concho 30 miles away, the bison had stayed in the Colorado drainage and died en masse. Such variability in temporal and spatial occupancy patterns are thought to have occurred throughout the bison's historic range and these examples speak to the importance of managing landscapes to ideally allow bison (and other wildlife) to move in response to dynamic ecological forces.

Today, human activities limit our opportunities to restore wild bison where they have adequate space to move and be shaped by these evolutionary influences as they had previously endured for millennia. This underscores the value of protecting the handful of large, ecologically intact landscapes that remain both within and at the edges the bison's core historic range in pursuit of the "second recovery" or ecological recovery of wild bison.

The Long Trail Back

This week, the 5th Biannual Meeting of the American Bison Society was held at Banff National Park, Canada and hosted the world premiere of a short film entitled "Wild Bison - The Long Trail Back".

The Wildlife Conservation Society supported production of the film to celebrate the recent designation of the American bison as the United States national mammal. For millennia, bison have been the focus of human art and storytelling - and digital film media can be a powerful compliment to artistic endeavors to express our emotional and intellectual curiosity, fascination and awe of bison as part of the long trail of the human experience. The film's producer Doug Lazarus from Vermont joined over 300 meeting attendees from Canada, the United States and Mexico and expressed joy at sharing this story and his embrace of the communities who gather together to restore wild bison.

Wild Bison: The Long Trail Back from Lake Champlain Productions on Vimeo.