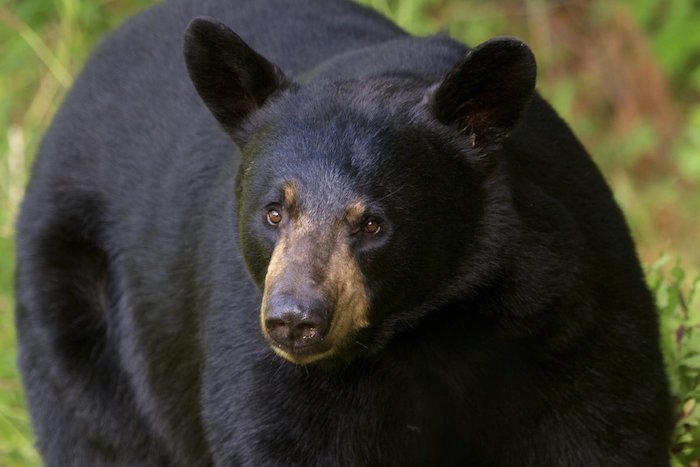 Black bears are familiar to everyone, and with the demise of the grizzly bear they are the largest of Colorado's carnivores. Although called black bears, they can be honey-colored, blond, brown, cinnamon or black. They may have a tan muzzle or white spot on the chest. Although brown or cinnamon-colored bears are sometimes mistaken for grizzly bears, there are no known grizzlies living in Colorado. Adult females are called sows, adult males are called boars, and youngsters are called cubs.

Adult males weigh from 275 pounds. Females weight about 175 pounds. Depending on the season, food supply and gender, black bears may weigh anywhere from 100 to 450 pounds. Black bears measure about 3 feet high when on all four feet. They can be 5 feet tall when standing on their back legs.

Cubs stay with the mother bear for their first year, denning with the mother and littermates over the winter. By the time of their second spring, they will be self-reliant and will separate from their mother by the second autumn.

In Colorado, the largest populations of black bears live in areas where there is Gambel’s oak and aspen, near open areas of chokecherry and serviceberry bushes. A black bear may have a range from 10 to 250 square miles.

Black bears learn to eat natural foods, such as berries, nuts and insects, as they are taught to forage by mother bears. People who live or camp in bear country need to be sure they don’t teach bears to become “garbage” bears by careless handling of food, scraps and garbage. Bears who find human food, even once, can change their habits to seek food from human residences and trash cans. Most bears seen in residential areas near or within bear habitat do not cause any damage. If a bear doesn’t find abundant food, it will move on.

Male bears are capable of breeding when they are 3 years old. Some female bears breed as early as 3 or 4 years of age, but 5 years is more common. After a 2-3 months of gestation, 1 to 3 tiny cubs are born mid-winter, typically while the mother is still in the den. Newborn cubs – weighing less than a pound at birth -- are blind, toothless and covered with very fine hair. When they emerge from the den in early or mid-May, they will weigh 10 to 15 pounds.