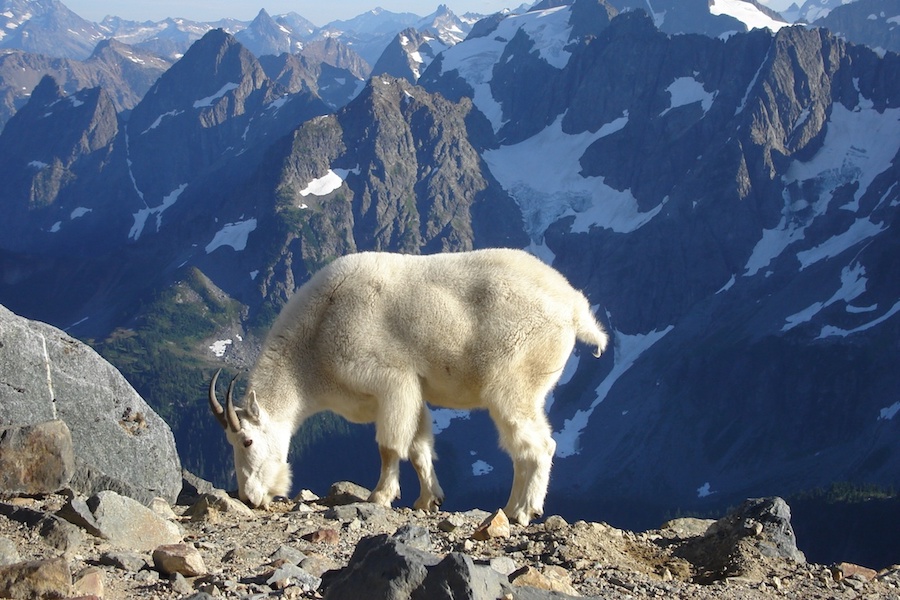 The North Cascades is one of the most diverse ecosystems on the planet. Animals with fins, fur, feathers and scales are all at home in this dramatic and beautiful environment. Elusive mammals like the gray wolf, fisher and wolverine wander the wilderness in small numbers, while more adaptable Columbia black-tailed deer, Douglas squirrels and pikas delight park visitors in abundance. A wide variety of birds breed within the park boundaries, including rare animals such as the bald eagle, osprey, Harlequin duck as well as a variety of neotropical migrants.

Fish and amphibians lurk in the clear mountain lakes and streams. The rich forests, rocky slopes and clean waters teem with invertebrate life, such as butterflies, dragonflies, stoneflies and mayflies. Each creature, no matter what its size, plays an intricate role in the North Cascades, whether it is a grizzly bear or a banana slug.

North Cascades is home to approximately 75 mammal species in 20 families; around 21 species of reptiles and amphibians representing at least four orders; roughly 200 species of birds in 38 families; at least 28 species of fish; and recent surveys have documented over 500 types of land insects and approximately 250 aquatic invertebrate species.

Wilderness of the North Cascades hosts wildlife less common in the more populated areas of Washington State. 75 mammal species in 21 families can be found in the North Cascades. Three species (gray wolf, grizzly bear, and Canada lynx) are listed as "threatened" or "endangered" under the Endangered Species Act. Grizzly bears and gray wolves have both been documented as residing in rugged terrain. Both are emblematic of the need for large contiguous areas of undisturbed wilderness that are necessary for these species to exist. Other species associated with wilderness areas that have been documented in the North Cascades include black bear, wolverine, river otter, cougar, lynx, and bobcat.

Bats, the only mammals capable of true flight, are among our least understood mammals. Twelve species of bats are thought to inhabit the North Cascades. National Park Service biologists, recently conducting a parkwide bat inventory, documented eight bat species using habitats within the park. Among those species found in the Cascades, the western small-footed bat weighs as little as four grams. Nocturnal and seldom seen, all bats found in the Cascades are insectivorous and most are closely associated with mature forests.

Mule deer, including the black-tailed deer subspecies, are the most common ungulates (hoofed mammals) in the North Cascades. Occasionally elk and moose wonder into the park. Though uncommon, mountain goats can be found on the higher elevation slopes of the Cascades. In these subalpine and alpine habitats, hoary marmots are common and can be seen and heard whistling at any sign of predators, such as golden eagles and coyotes. Pikas (pronounced Peeka) are common on mid to high elevation talus slopes.

Birds are significant components of biological diversity within the North Cascades ecosystem. Over 200 species in 38 families can be found in park habitats that range from alpine meadows to low elevation forests and wetlands. Three species (bald eagle, marbled murrelet, and spotted owl) are listed as "threatened" under the federal Endangered Species Act.

The rivers, lakes and streams of the North Cascades attract breeding, migrating, and wintering birds. The Skagit River attracts one of the largest wintering concentrations of bald eagles in the continental United States. Clear, fast-flowing rivers and streams host breeding populations of Harlequin ducks. Many species including raptors that breed further north migrate through this area in spring and fall.

Over half of the species breeding in the North Cascades are migratory species. Hummingbirds, flycatchers, vireos, swallows, thrushes, warblers, tanagers, and grosbeaks are among the species that return annually in spring. These migrants fly thousands of miles from their winter homes in the southern United States, Mexico, Central America, and even South America to breed in the park. May through July, male olive-sided flycatchers, warbling vireos, Swainson's thrushes, Wilson's warblers, and western tanagers sing from conspicuous perches to attract females and defend territories, all part of their annual breeding cycle. In August and September, having raised another generation of offspring and molted new feathers, they migrate south, returning to their winter homes.

Birds reflect changes to our environments. By monitoring their populations, distributions, and such demographic attributes as productivity and survival, birds can serve as "early warning signals" for environmental problems occurring in and around the North Cascades.

Twelve species of amphibians can be found in its streams, lakes, ponds and wetlands. Most species favor the still waters of the latter, but two species that brave the swift streams and rivers are the Pacific giant salamander and the tailed frog. The Pacific giant salamander is found in stream tributaries of the Skagit River on the west side of the Park. The tailed frog is often found in the cold, swift waters of small steep gradient streams at higher elevations such as Happy Creek. At these higher altitudes and much colder average temperatures, the tailed frog tadpoles may take three to four years to completely metamorphose into the adult stage. The tadpoles are superbly adapted for life in swift water. Its mouth parts form a sucker like disk enabling them to cling to rock surfaces while foraging for algae. They can even climb vertical rock faces in this manner under swift water. The majority of amphibians prefer the vastly different habitat of ponds, lakes and wetlands. The western toad, Northwestern salamander, long-toed salamander, rough-skinned newt and Pacific treefrog are a few of the species that breed in these fertile habitats. Most spend the early part of their lives almost entirely in the water until they are fully developed and capable of migrating to land. The Ensatina, however, is a small delicate terrestrial breeding salamander that lays its eggs in moist holes in the ground at lower elevations. The Ensatina has a constriction at the base of its tail, which allows the tail to break off if it gets attacked. The detached tail wiggles violently to distract the predator letting the tailless salamander to escape and live to regenerate another tail.

Perhaps the best known icon of the Pacific Northwest is the salmon. The Skagit River Watershed is the only watershed in the US to have runs of all Pacific salmon species: chinook (king), coho, chum, pink and sockeye. Every autumn between August and December, thousands of salmon work their way up the Skagit River, struggling against the current and leaping high out of the cascading whitewater to reach their spawning beds. The spectacle not only draws curious tourists but also hundreds of bald eagles that come to feed on the salmon and their spawned-out corpses.

While thousands of fish return each year, many salmon runs have been in decline for many years as a result of logging, dams, over-harvesting, cross-breeding with genetically inferior hatchery fish and a variety of other factors. Puget Sound Chinook salmon was listed as a threatened species in 1999. The Coastal Puget Sound bull trout (char), a distinct population segment of bull trout, was also listed as threatened in 1999 and the Baker River sockeye, the only native "lake-type" sockeye in the Puget Sound, may be threatened.

The other varieties of trout found in the waters of the North Cascades include steelhead (sea-run rainbow), resident rainbow, sea-run cutthroat and resident cutthroat, all of which are evolutionary relatives of salmon known as salmonids.

More often a source of revulsion, fear and annoyance than respect and gratitude, these many-legged, miniscule creatures are a vital part of the North Cascades ecosystem. Their creeping and crawling actually helps till the soil, break down nutrients and transport seeds. Being low on the food chain, insects are an important food source for many of the more familiar and well-liked animals.

Insects considered by many to be pests, such as mosquitoes, are actually kept in check by the more reviled spiders. In fact, while many of these creatures are considered nuisances, they are not only beneficial to the park environment, but are absolutely essential.

Aquatic insects, known as macroinvertebrates, are important food sources for the many species of fish that dwell in the rivers and lakes of the park, but are also important as indicators of water quality and habitat condition. Macroinvertebrates live in the water year-round and serve biologists as a sort of barometer of stream health as they are especially sensitive to environmental change and degradation. By studying these small creatures, park biologists are able to identify changes in water habitat not readily apparent through other methods.

From beetles to caterpillars to naiads and everything in between, these creatures may be small of stature but they are of great importance.