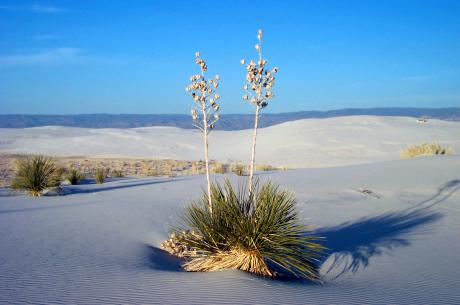 Rising from the heart of the Tularosa Basin is one of the world’s great natural wonders - the glistening white sands of New Mexico. Great wave-like dunes of gypsum sand have engulfed 275 square miles of desert, creating the world’s largest gypsum dune field. White Sands National Park preserves a major portion of this unique dune field, along with the plants and animals that live here.

At the northern end of the Chihuahuan Desert lies a mountain ringed valley called the Tularosa Basin. Rising from the heart of this basin is one of the world's great natural wonders - the glistening white sands of New Mexico.

Here, great wave-like dunes of gypsum sand have engulfed 275 square miles of desert and have created the world's largest gypsum dune field. The brilliant white dunes are ever changing: growing, cresting, then slumping, but always advancing. Slowly but relentlessly the sand, driven by strong southwest winds, covers everything in its path. Within the extremely harsh environment of the dune field, even plants and animals adapted to desert conditions struggle to survive. Only a few species of plants grow rapidly enough to survive burial by moving dunes, but several types of small animals have evolved a white coloration that camouflages them in the gypsum sand.

White Sands National Park preserves a major portion of this gypsum dune field, along with the plants and animals that have successfully adapted to this constantly changing environment.

Throughout the Park’s history the National Park Service has improved visitor access to the dune field, and continues to strive for this today. The historic visitor center is still in use; however, the museum has been updated numerous times. The most recent renovation took place in the spring of 2011 and focused on creating an exhibit that visitors of all ages can enjoy. From the first scheduled event, "Play Day" in 1935, the National Park Service has continued to offer programs and events that interest all ages. While these first events focused mainly on recreation in the dunes, programs today offer both recreation and information about the park. Topics range from the Tularosa Basin’s human history to desert survival and just about everything in between!

Although the dune field has been here between 7,000-10,000 years, the dunes haven’t always been protected as a national Park. It took thirty-five years and numerous attempts to protect this national treasure. In the early 20th century, multiple commercial interests attempted to mine these gypsum dunes; however, none of these attempts were successful due to the low market value of unprocessed gypsum sand. In the 1920’s, locals began to understand the uniqueness of the dunes and viewed the dune field as profitable in another way.

The White Sands dune field fit the description of what the National Park Service sought in prospective sites: "economic worthlessness and Parkalism." The area had already sparked scientific interest with the first published research occurring in scientific journals in 1870. However, the formation of White Sands National Park took time and support from many people. The most famous supporter and local "father" of White Sands was Tom Charles, an Alamogordo resident and businessman. Mr. Charles was not the first to suggest including White Sands in the National Park system; however he enthusiastically supported the idea and wrote to National Park Service officials and congressmen. Mr. Charles got his wish in the last days of President Herbert Hoover’s administration when Hoover declared White Sands a national Park under the Antiquities Act of 1906. Presidential Proclamation No 2025 (47 Stat. 2551) established the Park and set aside 142,987 acres for its "additional features of scenic, scientific, and educational interest."

Beginning in 1942, only months after the attack on Pearl Harbor, President Roosevelt signed Executive Order #9029, which created the 1,243,000 acre Alamogordo Bombing and Gunnery Range. Follwing the order, soldiers were even allowed to practice tank maneuvers inside the Park’s boundary. By 1945 the military had begun to test missiles and ask for the first park closures, a practice that continues today. The Alamogordo Bombing and Gunnery Range (Alamagordo Army Air Base) closed at the end of World War II and re-opened in 1958 as Holloman Air Froce Base. The White Sands Proving Ground was established in 1945 and was later renamed White Sands Missle Range. Both military areas still operate around the park boundaries and in the cooperative use area in the western part of the park. This cooperation mutually benefits both the military by providing them additional space and the park by insuring the lack of development on the surrounding lands.