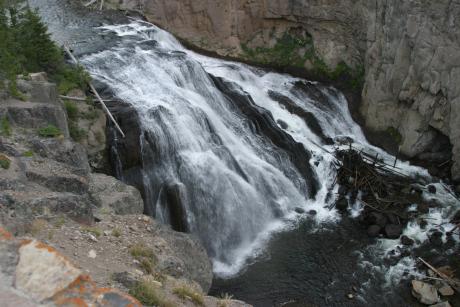 The specifics of the geology of the canyon are not well understood, except that it is an erosional feature rather than the result of glaciation. After the caldera eruption of about 600,000 years ago, the area was covered by a series of lava flows. The area was also faulted by the doming action of the caldera before the eruption. The site of the present canyon, as well as any previous canyons, was probably the result of this faulting, which allowed erosion to proceed at an accelerated rate. The area was also covered by the glaciers that followed the volcanic activity. Glacial deposits probably filled the canyon at one time, but have since been eroded away, leaving little or no evidence of their presence.

The canyon below the Lower Falls was at one time the site of a geyser basin that was the result of rhyolite lava flows, extensive faulting, and heat beneath the surface (related to the hot spot). No one is sure exactly when the geyser basin was formed in the area, although it was probably present at the time of the last glaciation. The chemical and heat action of the geyser basin caused the rhyolite rock to become hydrothermally altered, making it very soft and brittle and more easily erodible (sometimes likened to baking a potato). Evidence of this thermal activity still exists in the canyon in the form of geysers and hot springs that are still active and visible. The Clear Lake area (Clear Lake is fed by hot springs) south of the canyon is probably also a remnant of this activity.

According to Ken Pierce, U.S. Geological Survey geologist, at the end of the last glacial period, about 14,000 to 18,000 years ago, ice dams formed at the mouth of Yellowstone Lake. When the ice dams melted, a great volume of water was released downstream causing massive flash floods and immediate and catastrophic erosion of the present-day canyon. These flash floods probably happened more than once. The canyon is a classic V-shaped valley, indicative of river-type erosion rather than glaciation. The canyon is still being eroded by the Yellowstone River.