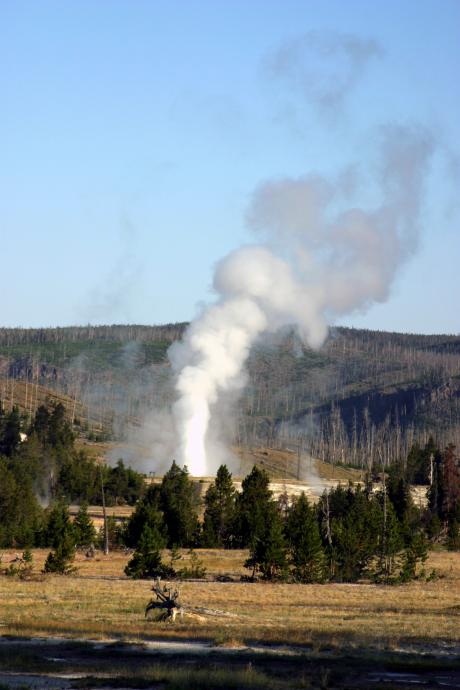 Sprinkled amid the hot springs are the rarest fountains of all, the geysers. What makes them rare and distinguishes them from hot springs is that somewhere, usually near the surface in the plumbing system of a geyser, there are one or more constrictions.

Expanding steam bubbles generated from the rising hot water build up behind these constrictions, ultimately squeezing through the narrow passageways and forcing the water above to overflow from the geyser. The release of water at the surface prompts a sudden decline in pressure of the hotter waters at great depth, triggering a violent chain reaction of tremendous steam explosions in which the volume of rising, now boiling, water expands 1,500 times or more. This expanding body of boiling superheated water bursts into the sky as one of Yellowstone's many famous geysers.

There are more geysers here than anywhere else on earth. Old Faithful, certainly the most famous geyser, is joined by numerous others big and small, named and unnamed. Though born of the same water and rock, what is enchanting is how differently they play in the sky. Riverside Geyser shoots at an angle across the Firehole River, often forming a rainbow in its mist. Castle erupts from a cone shaped like the ruins of some medieval fortress. Grand explodes in a series of powerful bursts, towering above the surrounding trees. Echinus spouts up and out to all sides like a fireworks display of water. And Steamboat, the largest in the world, pulsates like a massive steam engine in a rare, but remarkably memorable eruption, reaching heights of 300 to 400 feet.