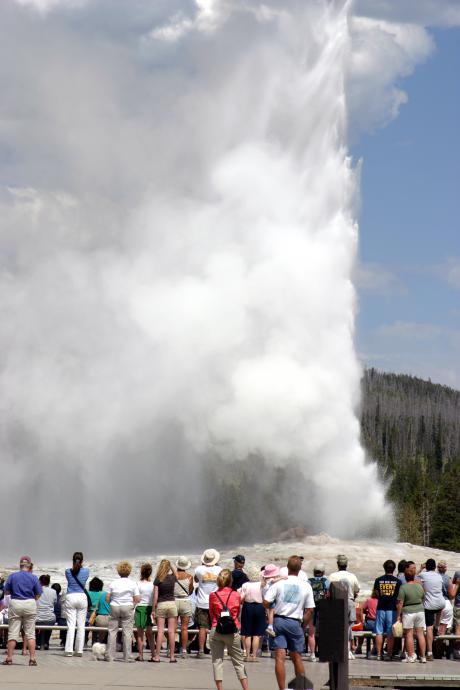 Evidence of the geological forces that have shaped Yellowstone are found in abundance in this district. The hills surrounding Old Faithful and the Upper Geyser Basin are reminders of Quaternary rhyolitic lava flows. These flows, occurring long after the catastrophic eruption of 600,000 years ago, flowed across the landscape like stiff mounds of bread dough due to their high silica content.

Evidence of glacial activity is common, and it is one of the keys that allows geysers to exist. Glacier till deposits underlie the geyser basins providing storage areas for the water used in eruptions. Many landforms, such as Porcupine Hills north of Fountain Flats, are comprised of glacial gravel and are reminders that as recently as 13,000 years ago, this area was buried under ice.

Signs of the forces of erosion can be seen everywhere, from runoff channels carved across the sinter in the geyser basins to the drainage created by the Firehole River.

Mountain building is evident as you drive south of Old Faithful, toward Craig Pass. Here the Rocky Mountains reach a height of 8,262 feet, dividing the country into two distinct watersheds.

Yellowstone is a vast land containing a landscape that is continually being shaped by geological forces.

Old Faithful erupts more frequently than any of the other big geysers, although it is not the largest or most regular geyser in the park. Its average interval between eruptions is about 76 minutes, varying from 45 - 110 minutes. An eruption lasts 1 1/2 to 5 minutes, expels 3,700 - 8,400 gallons (14,000 - 32,000 liters) of boiling water, and reaches heights of 106 - 184 feet (30 - 55m). It was named for its consistent performance by members of the Washburn Expedition in 1870. Old Faithful is still as spectacular and predictable as it was a century ago.