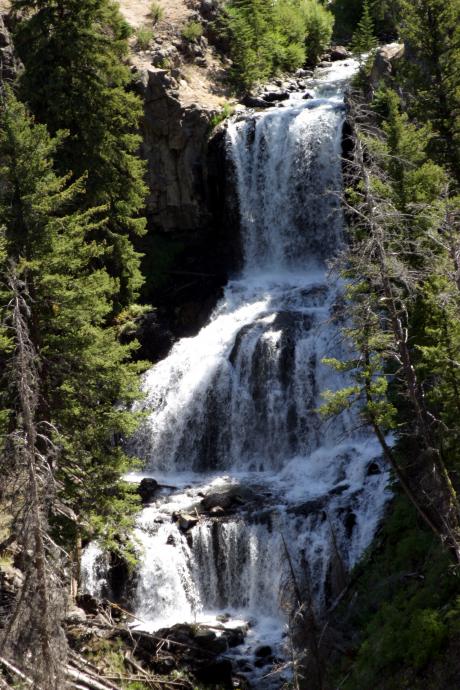 The geology of the Tower district is incredibly varied. Major landforms are expressions of geologic events that helped shape much of the Yellowstone area. Absaroka volcanics, glaciation, and erosion have left features as varied as Specimen Ridge's petrified trees to the gorges along the Yellowstone River's Black Canyon and the Grand Canyon of the Yellowstone.

Mt. Washburn and the Absaroka Range are both remnants of ancient volcanic events that formed the highest peaks in the Tower District. Ancient eruptions, perhaps 45 to 50 million years ago, buried the forests of Specimen Ridge in ash and debris flows. The columnar basalt formations near Tower Fall, the volcanic breccias of the towers themselves, and numerous igneous outcrops all reflect the district's volcanic history.

Later, glacial events scoured the landscape, exposing the stone forests and leaving evidence of their passage throughout the district. The glacial ponds and huge boulders (erratics) between the Lamar and Yellowstone rivers are remnants left by the retreating glaciers. Lateral and terminal moraines are common in these areas. Such evidence can also be found in the Hellroaring and Slough creek drainages, on Blacktail Plateau, and in the Lamar Valley.

The eroding power of running water has been at work in the district for many millions of years. The pinnacles of Tower Fall, the exposed rainbow colors of the Grand Canyon of the Yellowstone at Calcite Springs, and the fearsome gorge of the Black Canyon all are due, at least in part, to the forces of running water and gravity.

In the Lamar River Canyon lie exposed outcrops of gneiss and schist which are among the oldest rocks known in Yellowstone, perhaps more than two billion years old. Little is known about their origin due to their extreme age. Through time, heat and pressure have altered these rocks from their original state, further obscuring their early history. Only in the Gallatin Range are older outcrops found within the boundaries of the park.