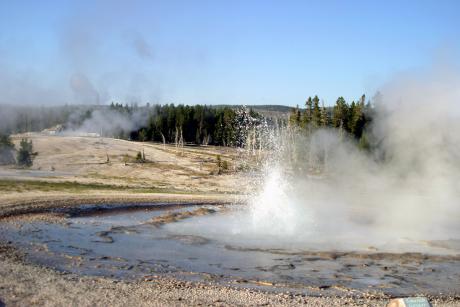 The West Thumb Geyser Basin, including Potts Basin to the north, is unique in that it is the largest geyser basin on the shores of Yellowstone Lake. The heat source of the thermal features in this location is thought to be relatively close to the surface, only 10,000 feet down! The West Thumb of Yellowstone Lake was formed by a large volcanic explosion that occurred approximately 150,000 years ago (125,000-200,000). The resulting collapsed volcano, called a caldera (boiling pot or caldron), later filled with water forming an extension of Yellowstone Lake. The West Thumb is about the same size as another famous volcanic caldera, Crater Lake in Oregon, but much smaller than the great Yellowstone caldera which formed 600,000 years ago. It is interesting to note that West Thumb is a caldera within a caldera.

Ring fractures formed as the magma chamber bulged up under the surface of the earth and subsequently cracked, releasing the enclosed magma. This created the source of heat for the West Thumb Geyser Basin today.

The thermal features at West Thumb are found not only on the lake shore, but extend under the surface of the lake as well. Several underwater geysers were discovered in the early 1990s and can be seen as slick spots or slight bulges in the summer. During the winter, the underwater thermal features are visible as melt holes in the icy surface of the lake. The ice averages about three feet thick during the winter.